Have you heard of Katsushika Hokusai?

Katsushika Hokusai is Japan’s leading ukiyo-e artist and none other than the most famous Japanese in the world.

Born in 1760, Hokusai was 44 years younger than artist Ito Jakuchu, who is so enormously popular now. Jakuchu passed away at the age of 85, but Hokusai lived until he was 90 years old. It is said that he kept on painting until the very end.

As an ukiyo-e artist, he left numerous masterpieces of woodblock prints such as the “Thirty-six Views of Mount Fuji,” a series of landscapes taking up Mount Fuji as the subject matter, and “Hokusai Manga,” a collection of sketches drawn as art manuals for his students. But he also demonstrated his incredible genius in nikuhitsuga, a form of painting in the ukiyo-e style.

Hokusai’s name spread throughout Europe after his death. His novel works of art astonished impressionists such as Van Gogh, Monet, and Degas, and had an enormous influence on Japonism, which swept through the West in the 19th century. Based on such contributions, Hokusai was selected by Life magazine as one of “the 100 most important people of the past 1,000 years”—the only Japanese appearing on the list.

Katsushika Hokusai, the ukiyo-e artist who enjoyed a higher reputation abroad than at home. Hokusai, a man who loved drawing more than anything else, who not only frequently changed his style of painting and pen name, but also his place of residence. His life story is shrouded in mystery, but one particularly astounding anecdote that we know of is his four-time visit to Obuse in the Shinshu region at the advanced age of 80 plus, and the magnificent work of art he left there. Why did Hokusai push his aging body so hard to go deep into the mountains of Shinshu? We visited Obuse to trace the footsteps of this master artist in his twilight years.

To Gansho-in Temple in Obuse to see a stunning ceiling mural, the crowning glory of Hokusai’s 90 years as an artist

There are various conjectures as to when Hokusai visited Obuse, but according to records at Obuse, his first visit was in 1842. At that time Hokusai was 83 years old. It is said that he came again to stay at Obuse at the ages of 85, 86, and 89. These were not mere sightseeing trips; he came to draw paintings. It was after he turned 80 that Hokusai discovered his true calling in nikuhitsuga and he vowed to dedicate himself to producing even better paintings up until the brink of death. What was he seeking in Obuse, and what legacy did he leave behind there? In pursuit of the actions taken by the mysterious Hokusai, we visited Obuse in the Shinshu region.

We take the Shinkansen train from Tokyo to Nagano Station and transfer to the Nagano Electric Railways to reach Obuse Station. The time it currently takes to get there from Tokyo is very short. But back then, the long trip over mountains and valleys to cover the 240-kilometer distance from Edo (now Tokyo) to Obuse must have been extremely rough for the elderly Hokusai.

Our first destination in Obuse is Gansho-in Temple. This temple has a huge ceiling mural that was completed by Hokusai in the year before he passed away at the age of 90. It takes about 15 minutes by cab from Obuse Station. The road leading to Gansho-in, situated at the foot of the mountain, Karidayama, is surrounded by apple orchards and vineyards, and wrapped in a tranquil atmosphere so characteristic of Shinshu. 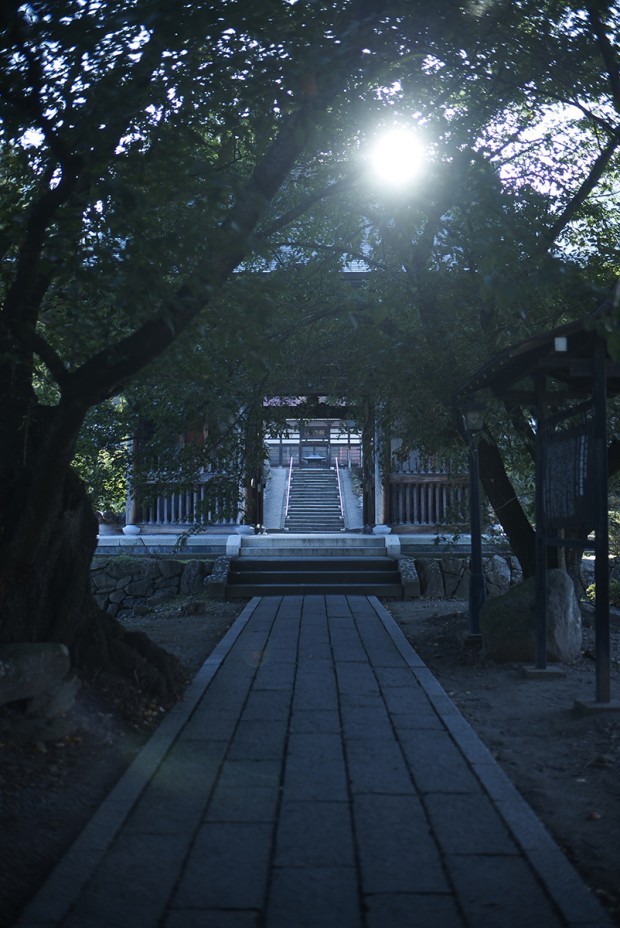 Then, standing in front of the Nio-mon Gate of Gansho-in, found nestled in foothills, we are galvanized by the majestic silhouette of the ancient temple lit by the sun behind it. Inside the main hall of the temple, we tilt our heads back to look up at the ceiling. There, covering a large, nearly 40 square meter space, is a vibrant portrayal of a colorful phoenix.

Named “Phoenix Staring in All Directions” because it appears that the sharp eyes of the phoenix are glaring at you wherever you are, this painting has a force that can overpower all those who gaze on it. The richly colored phoenix, painted with lavish use of expensive pigments on a foundation made of layers of white clay, and sprinkled with gold dust, looks like it will start moving at any moment now. It has a compelling majesty that befits a stunning masterpiece of Hokusai’s last years. 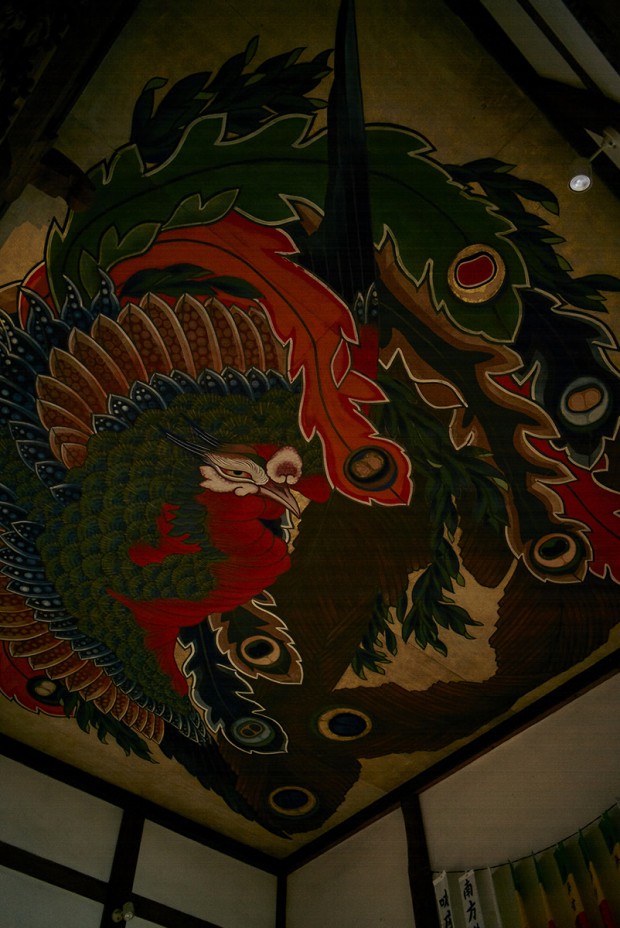 But was 89-year-old Hokusai really able to draw something so large by himself? According to various studies, from the composition and use of color there is no doubt that this is a work of Hokusai, but there is a stain in the surrounding gold dust that is thought to have been made by a paint dish left there. This doubt about its creation is said to have arisen from the belief that Hokusai would never had made such a mistake. When all such facts are considered, the current dominant theory is that Hokusai drew the whole image of the phoenix and the face, and then had his daughter, Oei, do the other parts. And this was not because he was unable to do it all himself due to his age, but because he wanted to start work on his next project. We cannot but be amazed at Hokusai’s strong desire to create.

This ancient temple, famed for Hokusai’s “Phoenix Staring in All Directions,” also displays a work of calligraphy by Takai Kozan, a local wealthy merchant who also studied under Hokusai and had encouraged him to draw the ceiling mural. Its display tells a tale of the master-student relationship that was cultivated in Obuse. Also on the temple grounds is the mausoleum of Fukushima Masanori, a samurai warrior from the Sengoku period (c. 1467–c. 1603) who transferred to this fief, and a pond, Kawazugassen no Ike, where haiku poet Kobayashi Issa was inspired to write a haiku to encourage his ailing child, “Yasegaeru makeruna Issa kore ni ari” [Scrawny frog, fight on. Issa has your back]. The tranquil ancient temple gives you a glimpse of the cultural side of Obuse. 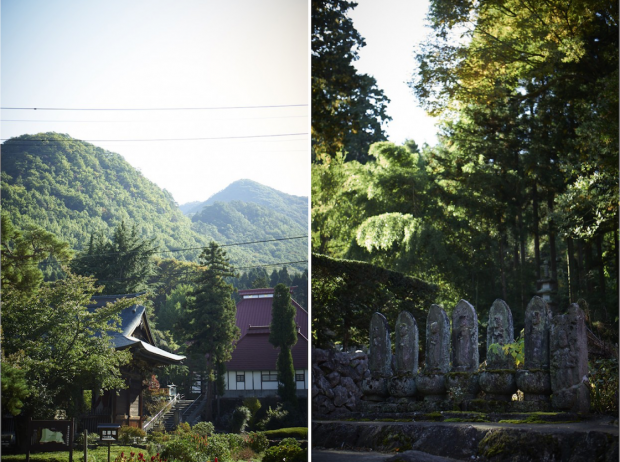