Once trade between Japan and the West started flowing again in 1853, a flood of foreign imports engulfed Europe and other Western countries. The Japanese artist, 葛飾北斎 (Katsushika Hokusai, 1760 – 1849) in particular made great waves in the Western world, where his woodblock prints and paintings fueled the Japonisme boom that swept through the world from the mid-19th century onwards. Hokusai’s works transformed Western arts—from inspiring Claude Debussy’s “La Mer: Three Symphonic Sketches” to the compositional motifs of Paul Cézanne. In fact, a number of items displayed at the International Exhibition of 1867 in Paris drew clear parallels to Hokusai and his fellow woodblock print artists.

In 2014, Hokusai set off another surge of interest in Japanese art with the largest-ever Hokusai exhibition in Paris. Over 350,000 people visited the show from October 1, 2014 to January 18, 2015 held at the Galeries Nationales du Grand Palais, where some 700 works of art and other documents were displayed. 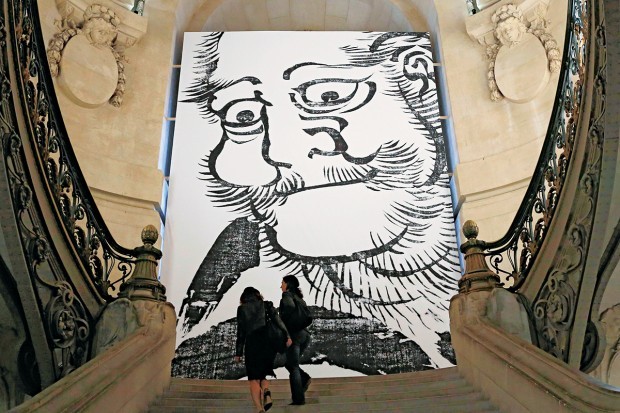 Fortunately for fans of Japanese art, the force that is Hokusai is once again brewing up quite the storm this year with 3 great exhibitions opening around the globe. First was the “Hokusai: Beyond the Great Wave” held at The British Museum from May 25 – August 13, 2017. The highly-anticipated “Hokusai and Japonisme” exhibit opened October 21, 2017 at the National Museum of Western Art in Tokyo, Japan and runs until January 28, 2018.

The Hokusai wave sweeps up Australia!

Another opportunity to enjoy Hokusai’s vision of old Japan comes in between the above-mentioned exhibits at the National Gallery of Victoria. Washing up to the shores of Melbourne, Australia was the exhibition simply titled “Hokusai”, which ran from July 21 – October 15, 2017. This show afforded visitors the chance to come face to face with 176 works spanning throughout the artist’s impressive seventy-year career. 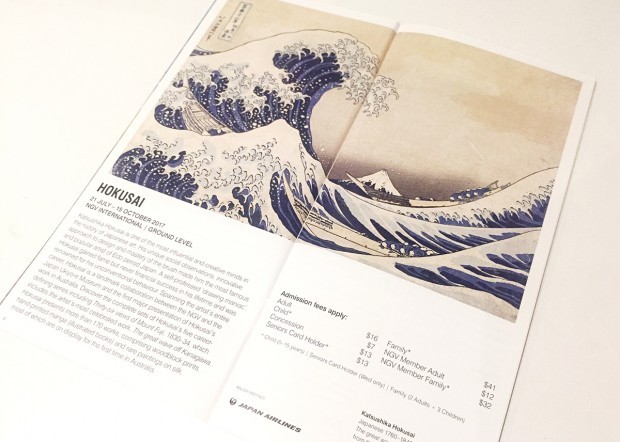 Pamphlet for the “Hokusai” exhibition at the National Gallery of Victoria displaying “The Great Wave off Kanagawa.”

Among the artworks on display from the National Gallery of Victoria’s own collection and those on loan from the Japan Ukiyo-e Museum in Matsumoto, Japan, is Hokusai’s most iconic work, 「神奈川沖浪裏」 (“The Great Wave off Kanagawa”). Even those who perhaps aren’t familiar with the master printer, have definitely seen this image before. Other well-known examples going on display are his comic-like manga drawings in 『北斎漫画』 (“Hokusai Manga”) that perfectly display the artist’s eccentricity.

The show also included seven series of woodblock prints by Hokusai that will be shown for the first time in Australia, such as “Thirty-six Views of Mt Fuji” from 1830-34, “A Tour to the Waterfalls in Various Provinces” circa 1832, and the comically cute, “One Hundred Ghost Stories” series published around 1831. 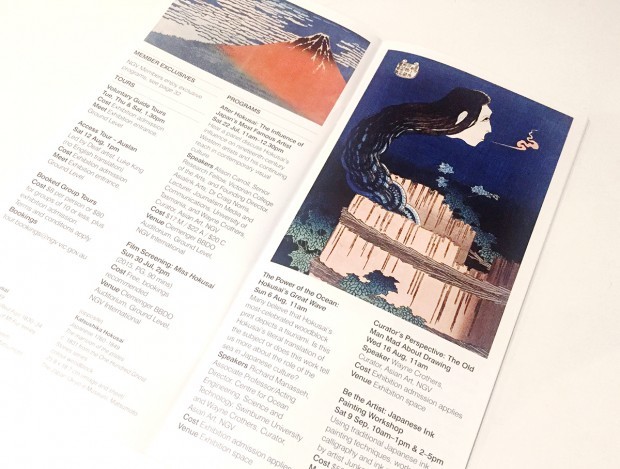 A look inside the pamphlet for the “Hokusai” exhibit at the National Gallery of Victoria, reveals two famous works by the Japanese artist: “South Wind, Clear Sky” on the leftmost page and “Okiku the Ghost Emerging from a Well” on the right.

Why one hundred ghost stories? More about the world within Hokusai’s art

In Japan, a custom began in which people would tell spooky stories in the sweltering summer season to give each other the chills. What an interesting way to stay cool! People would form a circle around many lighted candles and share a ghost story, one by one. After finishing a story, one candle was extinguished, and slowly the room would get darker and darker.

It was believed that by repeating this one hundred times, a ghost would appear within the circle after the hundredth candle went out. From this tradition, games and woodblock print series such as Hokusai’s “One Hundred Ghost Stories” appeared on the market and featured popular Japanese ghost and demon characters that frequently appeared in these summertime stories.

With this in mind, viewing Hokusai’s works takes on an added layer of depth. Before heading out to this monumental exhibit, take a look at the following articles listed after the exhibition information to find out more about the fascinating artist who has so thoroughly charmed the world again and again. Join us in the Hokusai wave sweeping through the world this year! 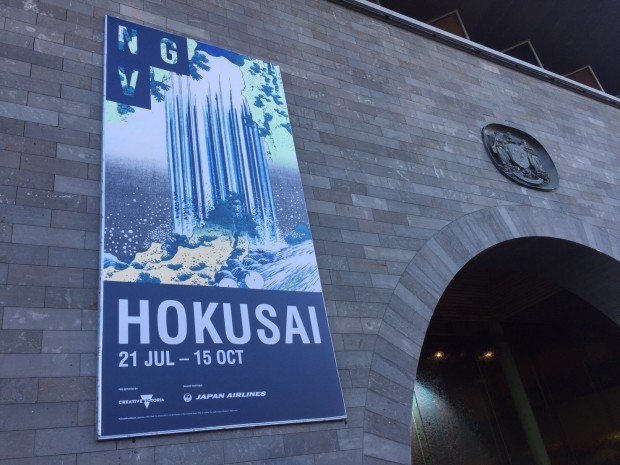 A poster at the entrance of the National Gallery of Victoria announcing the upcoming Hokusai exhibit.

Please note that the following exhibition has closed.

The entrance of the National Gallery of Victoria International, with the institution’s name on the leftmost image and its popular water wall on the right.