To Love and Then Curse it: 4 Female Ghosts from Japanese Folklore

Though once human, these yūrei, Japanese for ghosts comprised of the characters 幽 (dim, faint) and 霊 (soul, spirit), now appear before those that they have cursed. According to Japanese folklore influenced by both 仏教 (bukkyo, Buddhist) and 神道(Shinto, Japan’s ethnic religion) beliefs, those who die violently or passed with a burning desire for revenge cannot move on to the afterlife and become ghosts who try to dispel grudges incurred during their lifetime. In most cases, this means targeting a certain few individuals. The Japanese ghost is in some ways similar to the Western concept of ghosts, yet differ in some aspects, too. Let’s take a closer look at how yūrei are depicted in Japanese art.

Quite often, the ghosts that appear in Japanese stories were those of susceptible women who were deceived and then cast aside by men. Their tormented figures seeking vengeance often appear in Japanese art as well. The portrayal of beautiful female forms, a genre of Japanese art called 美人画 (bijinga), combined with the intense emotions of tragedy or wrath make for arresting subject matter.

The difference between love and hate is paper thin. Due to their passion towards their partner, female ghosts often are depicted as having the desire to kill their former lovers in a fit of passionate rage. In the following images depicting 4 well-known Japanese ghosts, the artists chose not to try and frighten viewers with showy or gory visual effects. Instead, the painters draw viewers into the world of their works through pathos. The overwhelming loneliness and tangible feeling of grief given off by these women are the key to these works’ fascinating charm. Through these works by famous Japanese painters of the 19th and 20th century, we feel the fleetingness of ordinary life and the at times, how an overwhelming intensity of emotion can cripple.

The tragedy of leaving behind one’s child

In possession of the Keio University Library.

Women who died when pregnant or in childbirth were thought to worry over their child’s wellbeing, and this distress was manifested by a supernatural being called 姑獲鳥 (Ubume), also written as 産女. One of the most celebrated Japanese 歌舞伎 (kabuki theatre) actors of the Meiji period (1868-1912), Onoe Kikugoro V, owned this painting featuring Ubume. Her apparition wrapped in a blood-soaked kimono underskirt, materializes before the viewer. Though Ubume’s face is not shown, her sensually drawn back and hips are full of emotion. Peeking out from under the ghost’s right arm, we glimpse the heartrending sight of a child’s feet.

The artist Tsukioka Yoshitoshi was the disciple of famed woodblock artist, 歌川国芳 (Utagawa Kuniyoshi, 1797-1861). Yoshitoshi pioneered new approaches to the world of 浮世絵 (ukiyo-e, a genre of commoner art depicting the everyday) and is said to be the last giant of the ukiyo-e genre.

A character named 六条御息所 (Lady Rokujo) appears in what is hailed as the world’s first novel, 「源氏物語」 (“The Tale of Genji”) written by Lady Murasaki in the beginning of the 11th century. In resentment against her rival for Lord Genji’s affections, Lady Rokujo transforms into a vengeful spirit and murders Genji’s wife, 葵 (the Lady Aoi).

Here, Lady Rokujo is portrayed by the Taisho period (1912-1926) artist Uemura Shoen, famed for her paintings of beautiful women. The artist wrote in a collection of her published essays titled “Seibisho” that, “Among the many works I have painted, only one, ‘Flames,’ is weirdly beautiful. The flames of jealousy of a middle-aged woman─the surface expression of obsessive burning envy is what I have painted.” 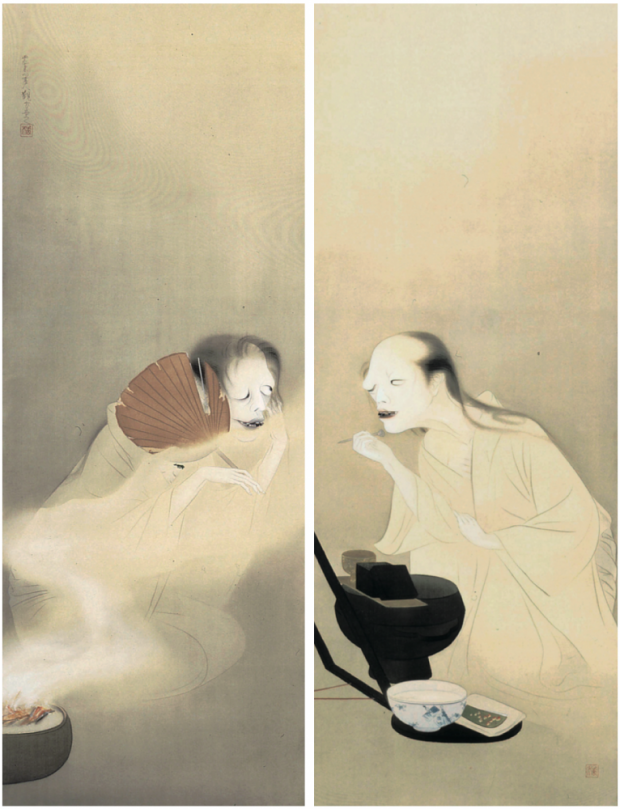 The Japanese painter Yoshikawa Kanpo, an expert of 風俗研究 (genre pictures studies), produced these two paintings in 1948. In the right-hand painting, Oiwa, a character from the ghost story 「東海道四谷怪談」 (“Tokaido Yotsuya Kaidan”), applies her morning makeup. On the other hand, on the left, we find Okiku from the ghostly folktale 「番町皿屋敷」 (“Bancho Sarayashiki”), who sits beside a smoky fire to ward off mosquitoes. Viewers feel a sense of familiarity when looking at the two subjects’ behavior, despite them being disfigured ghosts.

Though now we see their faces and bodies following their tragic and cruel demises, both of these women were regarded as beauties in their lifetime. In their graceful forms we catch a small glimpse of their former beauty and life.