Though ghosts and demons do not exist in this world, the Japanese artist Kawanabe Kyōsai proved his artistic worth in his paintings depicting the supernatural. Kyōsai was very talented at realism, yet he also excelled in drawing invisible things—and enthusiastically did so! He extensively studied many artworks of the past from a variety of art schools, and was influenced by them.

The decorative screen “Night procession of the hundred demons” painted by Kyōsai, seen below, was also inspired by several past artists. However, though Kyōsai drew from other artists’ ideas, he brought the demons or yōkai to life by imbuing them with humorous character unlike anything seen before. Kyōsai continuously drew upon his experiences from drawing animals to add creative touches to his works, in addition to his characteristic humor to make the paintings distinctively his own creation.

The night procession of the hundred demons is a popular motif in Japanese art history known as “hyakki yagyō” or “hyakki yakō,” in which on certain nights, demons would parade through the human world. This tale first appeared in the Heian period (794-1186). One of the oldest and most well-recognized images of this event is the “Night Parade of One Hundred Demons” scroll at Shinju-an of Daitokuji Temple in Kyoto from the 16th century. Undoubtedly, Kyōsai also used this scroll as a source of inspiration for his work, too. Though many works based on the Shinju-an copy exist, Kyōsai’s version features more humor than any other example thus far. His playful creatures stand out and attest to Kyōsai’s amazing talents.

Kyōsai’s compositions are bold and bizarre too!

When talking about Kawanabe Kyōsai, two points that deserve mention are the diversity of his works and the eccentric ideas found within his oeuvre. From his emulation of Kano school-style paintings to Buddhist paintings, and portraits of beautiful women, Kyōsai shone in a wide array of art genres. His skills are also apparent in his caricature drawings, the genre that he is most well known for, as well as ghost paintings and painting designs for handicrafts and industrial craft objects. Truly a multitalented artist, Kyōsai excelled in whatever genre he attempted.

True for all of his paintings though is the fact that he produced great compositions. In his series “A Journey Around Hell and Paradise” comprising of 35 paintings total, one of which is introduced below, we can see Kyōsai’s compositional skills on display. In Japanese art history, many works depict the Pure Land, the Buddhist version of heaven or paradise. But who would think to include a steam locomotive in the Pure Land aside from Kyōsai?! He was not just enjoyable as an artist who drew oddly adorable creatures or comical surprises, but he truly was highly skilled as well. 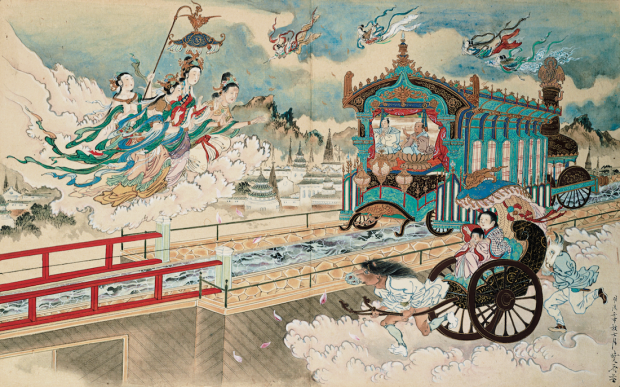 The series “A Journey Around Hell and Paradise” was requested by Kyōsai’s patron Katsuta Gohei, the owner of a large shop in Nihonbashi in Tokyo when his daughter died prematurely. Katsuta’s daughter is featured with Amida Buddha going through the next world. After passing through the realm of the deceased, they reach the Pure Land. In this series, there is no feeling of sadness or misery despite the theme, but rather Kyōsai draws the otherworld as very lively and bright. His treatment of the series reveals the artist’s sympathy towards his patron’s loss of a beloved child.

Translated and adapted by Jennifer Myers