From sumo wrestling frogs and drunken mice to downright adorable monkeys, the comically whimsical creatures of Japanese painting genius, 伊藤若冲 (Ito Jakuchu, 1716-1800), are easy to appreciate even for those unfamiliar with Japanese art. In recent years, this Kyoto-based artist and his wide array of artworks have garnered much acclaim. In particular, Jakuchu is famous for his paintings of animals such as the colorful, faux paus mosaic screens, “Birds, Animals, and Flowering Plants in Imaginary Scene,” and the 30 scrolls of his gorgeous and richly detailed series, Colorful Realm of Living Beings. However, the artist’s 水墨画 (suiboku-ga, India ink paintings) featuring manga-esque, almost Pop art-like animals depicted with wonderfully loose, free brush strokes deserve attention as well.

The artist’s love for animals shines through these cute, Pop art-like characters!

Though somewhat cartoon-like in appearance, Jakuchu’s animals maintain a realness that betrays not only the artist’s great observational skills, but also his love for the natural world. Below, we take a look at several examples featured in Waraku Magazine’s February・March 2018 issue.

In the magazine’s feature on Jakuchu’s India ink paintings, we can see how the artist’s anthropomorphic portrayal of various critters adds a humorous and charming touch to these monochromatic works. Can you recognize these scenes and behaviours from human daily life? Let’s take a look at 2 works featured in the image below. 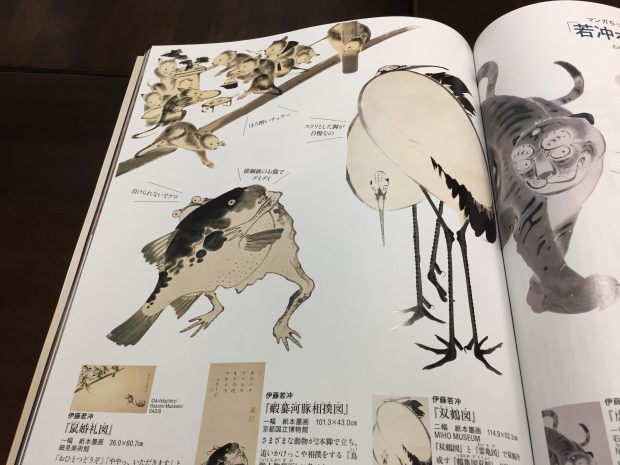 What imagination! In “Sumo Match Between a Globefish and a Frog,” we find a fantastical scenario of a fish and amphibian pair locked in an intense wrestling match as seen in the center of the above image. With a determined look, the frog stands upright on his back legs while grappling with the round body of a globefish. Puffing its belly out in defiance, the fish pits its weight against its amphibian foe by using its tail as an anchor. Who will win?

That one drunk friend

A fun and festive scene unfolds in the hanging scroll, “Marriage of Mice,” a portion of which is seen in the upper left of the above image. A wedding banquet is taking place among the families and friends of a not-featured mice bride and groom. One mouse is seen serving sake while another sips the celebratory alcohol. Meanwhile, some of the other attendees leave their seats to greet a pair of newcomers: another mouse dragging a drunken companion by the tail. The inebriated creature appears to clutch its sake cup in a very humorously human fashion.

Ito Jakuchu mastered a technique of distorting and exaggerating specific characteristics of his subjects that resembles the art of caricature. This approach produces highly animated characters with a comical effect as seen in the examples below. 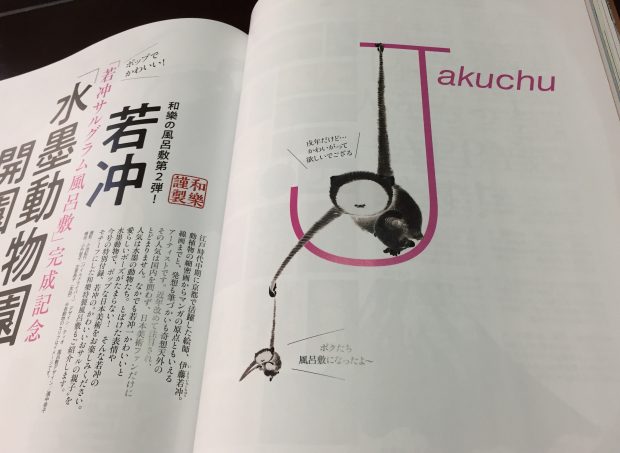 Inspired by a Zen Buddhist fable about monkeys reaching for the moon’s reflection in water, Jakuchu’s scroll titled “Two Gibbons Reaching for the Moon” features a mother and child pair of monkeys linking arms to reach something below. These figures can be seen in the above image. Jakuchu comically elongates their arms to emphasize their impossible desire to pick up the moon. The little monkey figure appears to be an almost exact copy of its parent albeit in cute, miniature form, and that combined with their determined faces has us want to extend a helping hand as well. 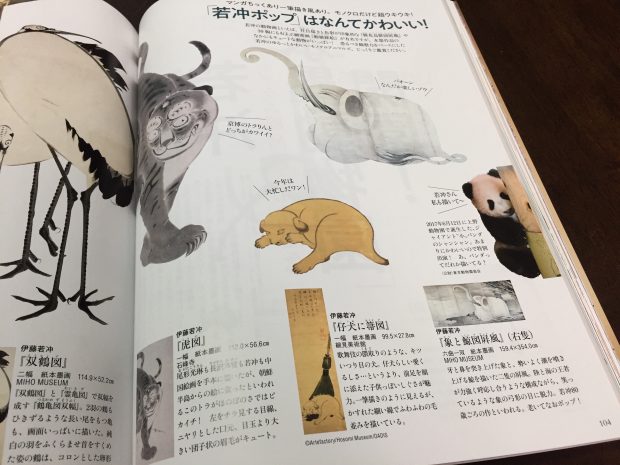 Puppy with a message

As with the previous monkey example, the theme of this scroll, “Puppy and Broom,” featured in the above image also deals with a Zen parable concerning the Buddha nature of animals. There is a comedic contrast between the silliness of the puppy’s action of play fighting with a monk’s broom and the look of serious determination on the canine’s face. This puppy sends the message that all living things have a Buddha nature in Jakuchu’s eyes.

Jakuchu’s “Tiger” painting seen above, references examples of Korean tiger art, but the artist adds his own unique interpretation to the animal’s personality as well. The beast’s humorous side eye and lopsided grin combined with its large, arched brows seem to demand the viewer to find it cute. What do you think?

Ito Jakuchu’s menagerie of adorable birds and beasts makes it hard not to love Japanese art!