It’s the Gion Matsuri, and everyone around is involved!

The month of July will find people in Kyoto, Japan celebrating 祇園祭 (Gion Matsuri), a tradition that extends back to the year 869 A.D. The month long festival includes a range of various events, from traditional rituals to elaborate processions, but the most popular is undoubtedly the 山鉾 (Yamaboko) parade on July 17. While the Yamaboko parade is perhaps the face of Gion Matsuri, the 渡御 (togyo, imperial procession of the gods) forms the backbone. Let’s take a closer look at what this entails with the following remarks provided by Tomoo Imanishi, the former head of the Miyamoto group. 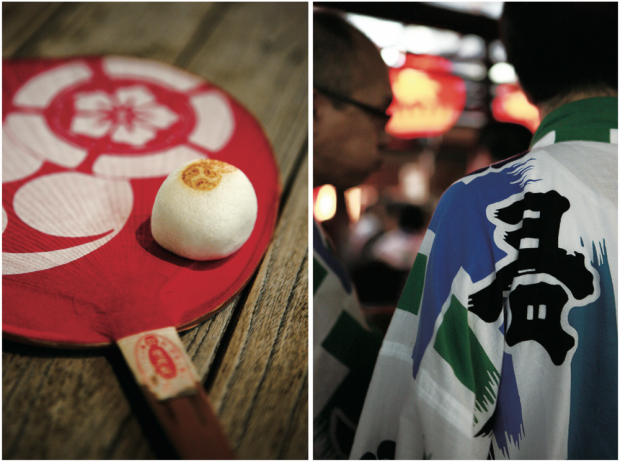 The spiritual side of Gion Matsuri

Gion Matsuri is comprised of various events and 神道 (Shinto, the ethnic religion of Japan) rituals. Among the important rites are the 神幸祭 (Shinkosai) and the 還幸祭 (Kankosai) ceremonies in which the guardian deities of 八坂神社 (Yasaka Shrine) are transported away from, and then back to Yasaka Shrine with three おみこし (omikoshi, portable palanquin shrines). These are carried through the streets in simulation of the gods making an imperial visit. The famous Yamaboko parade so well loved by tourists actually serves as the precursor to the Shinkosai portion of this ritual.

Below is a glimpse of one of Yasaka Shrine’s omikoshi being paraded through the streets. Shouldering the divine palanquin are the members of the Nishiki Shinyokai group from Kyoto’s Nishiki Market. 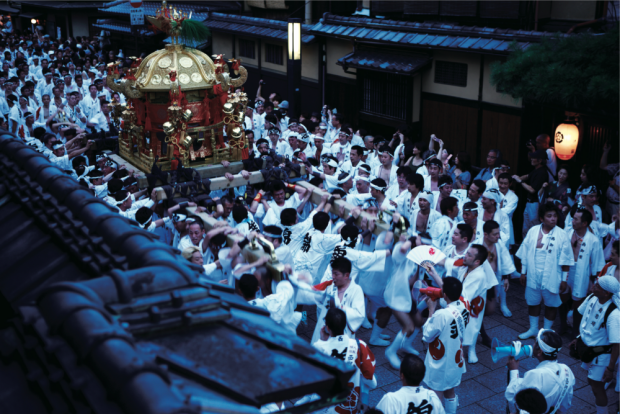 The festival participants cry out “hoitto, hoitto” instead of Tokyo’s “wasshoi, wasshoi” as a rallying cry, and do their best to put on a gallant display as they carry the heavy shrines through the streets. Above the octagonal roof of this portable shrine for Yasaka Shrine, sits a mythical phoenix.

How locals come together to continue an ancient tradition

Shrine parishioners from the Yasaka school district within the territory of Yasaka Shrine belong to the Miyamoto group. Among the group’s members are people from various backgrounds, Gion shop owners, company workers, members of government, and so on. We organize and perform several responsibilities related to Gion Matsuri. Some include presenting sacred objects such as Emperor Enyu’s written imperial commands, swords, shields, stringed koto instruments, and bows and arrows, as well as guiding the portable shrines, and arranging a purification rite. In these duties to help the god, we feel great responsibility.

What happens during the imperial procession

Let’s turn our attention to the portable shrines called mikoshi, or omikoshi to be respectful, for a moment. For Yasaka Shrine there are 3 main omikoshi called Higashi-goza, Naka-goza, and Nishi-goza in addition to other smaller omikoshi. The names for the main three translate to something like the eastern, central, and western positions. The god Susanoo-no-mikoto is enshrined in the central portable shrine, while Kushiinadahime-no-mikoto sits in the eastern one, and the western one holds the deity Yahashira-no-mikogami. All 3 of the Yasaka Shrine’s portable palanquins feature different shapes; the central one exhibits a hexagonal shape, while the eastern one is square-shaped. 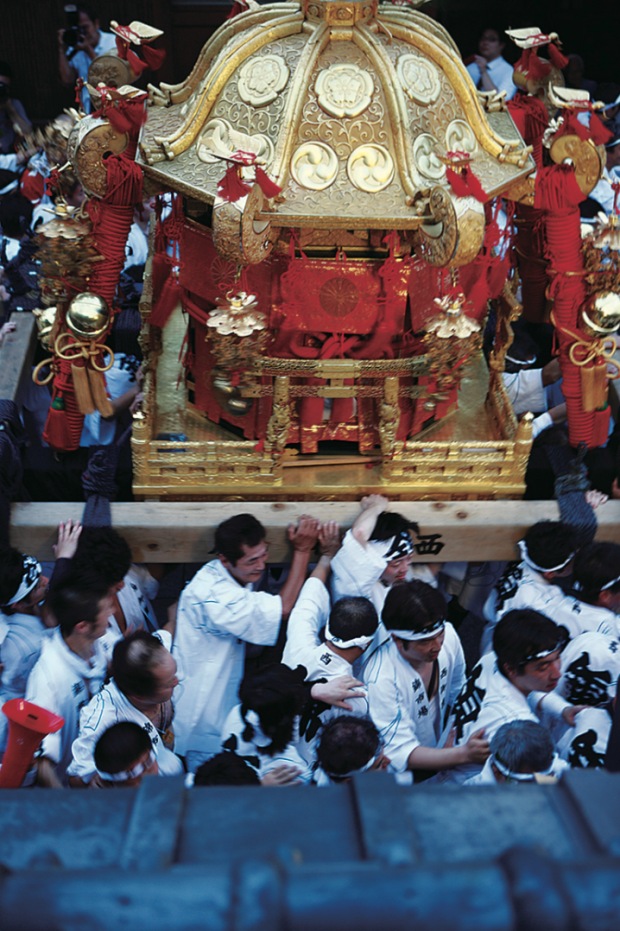 The divine palanquin that transports one of Yasaka Shrine’s guardian deities, Yahashira-no-mikogami, moving through the streets. Many people fill this street which is also famous for its cherry blossoms in spring.

These 3 shrines are lined up before Yasaka Shrine’s dance hall on July 10. Afterwards, under the Miyamoto group’s guidance, the central portable shrine, Naka-goza, heads out towards the Shijo bridge that spans the Kamogawa River. Water drawn up from the river is poured over the portable shrine in a washing ritual that is meant to purify. On July 15, a different ceremony transfers the divine spirits into the omikoshi. Then on the 17th, the portable shrines depart from Yasaka Shrine and move to a place where the sacred palanquins are temporarily lodged in Shijo Street. This latter act is the ceremony known as Shinkosai.

Following the Shinkosai ceremony until July 24 when the deities return to Yasaka Shrine, the new location called お旅所 (otabisho) of the portable palanquins serves as a temporary shrine. In other words, to pray to the gods, one must visit them in Shijo Street during this period. And that is just what the Gion district’s well reputed 芸妓 (geisha, professional entertainers trained in traditional Japanese arts) and 舞妓 (maiko, apprentice geisha) do. During this time, the women visit and pray the relocated deities in silence in a custom known as 無言参り (Mugon-mairi). A belief holds that by visiting this spot for seven nights in silence, one’s wish will come true. 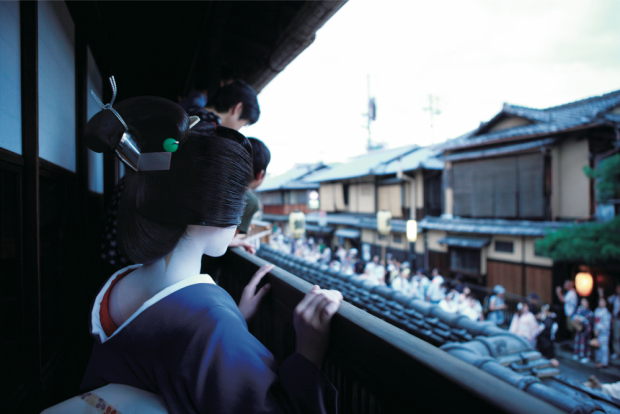 The restaurant and bar Tsudaro operates in a remodeled Japanese tea house. From the second floor, a geisha entertainer watches the approach of one of Yasaka Shrine’s 3 main portable shrines, the western omikoshi. Shouldering the divine palanquin are the members of the Nishiki Shinyokai group from Kyoto’s Nishiki Market.

At around five o’clock in the evening of the 24th, the portable shrines depart from Shijo Street and return to Yasaka Shrine in the middle of the night between eleven and midnight. Afterwards their spiritual beings are formally transferred back in the Kankosai ceremony. In it, a young boy acts as an attendant, and rides a divine horse. The boy is selected from the Kuze area in the Minami district of Kyoto among Ayatokunaka Shrine’s parishioners. On his chest, the young boy wears the carved wooden head of a horse in which a deity is believed to reside.

Every year in July, our lives revolve around the Gion Matsuri. We don’t consider it troublesome at all, but rather, it is a very natural aspect of us living in this special place.