The Beauty of Japan as Drawn by Hokusai: Cherry Blossoms

As one of Japan’s most popular artists around the world, 葛飾北斎 (Katsushika Hokusai, 1760-1849), helped formulate the image of Japan and Japanese art for many foreigners, particularly in the late 19th century. In this series, we take a look at several motifs featured in Hokusai’s artwork that exemplify the beauty of Japan. In this article, we focus on the theme of 桜 (sakura, Japanese cherry blossoms). 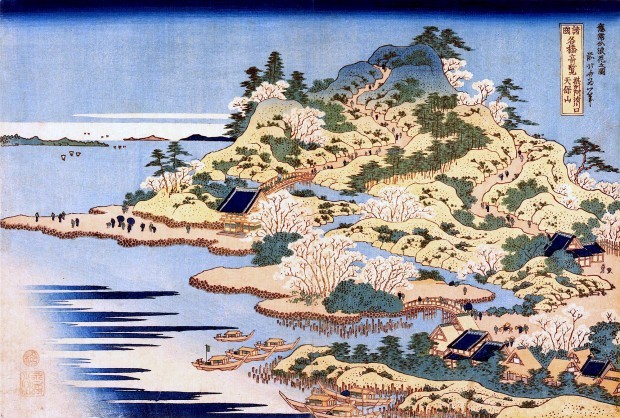 “Mount Tempo at the Mouth of the Aji River in Settsu” from the Unusual Views of Celebrated Bridges in the Provinces series, oban-sized polychrome woodblock print, c.1833-1834, Sumida Hokusai Museum.

As the title of the series implies, each work within the series showcases a famous landmark using unique, design-like compositions. Among the 11 prints however are ones that did not actually exist outside of Hokusai’s imagination! What can we say except that Hokusai’s creative powers were at work when he created this print with its fictional bridge. The print also features the newly completed man-made hill called Mount Tempo with cherry blossom trees blooming around its base.

Alongside Mount Fuji, another symbol for the beauty of Japan that Hokusai incorporated into his artwork would be sakura, or Japanese cherry blossoms.

From around 1794 and for the next several years, Hokusai used the art name 俵屋宗理 (Tawaraya Sōri). Tawaraya is a name often associated with the 琳派 (Rimpa School), a group of traditional craftsmen who pursued classical genres and were supported by wealthy merchants and aristocrats. Perhaps to back up his new name and relation to the Rimpa School, Hokusai produced many bird and flower-themed works, which were the standard and token theme for Rimpa.

Though that serves as one possible explanation, many works by Hokusai at this time showcasing sakura—a symbol of beauty for both Japan and the Rimpa School—remain today. In regards to the two artworks introduced below, “Bullfinch and Weeping Cherry” and “Hawk and Cherry Blossoms”, the drawing style and treatment reveal very Rimpa design-like qualities along with Hokusai’s penchant for realism. The combination of these styles adds charm to the prints.

Thanks to his Rimpa studies, Hokusai could combine classical motifs and styles like sakura or Mount Fuji with the activities and leisure spots of commoners, yielding fine artwork that overcomes time and traditionally-defined genres of art. 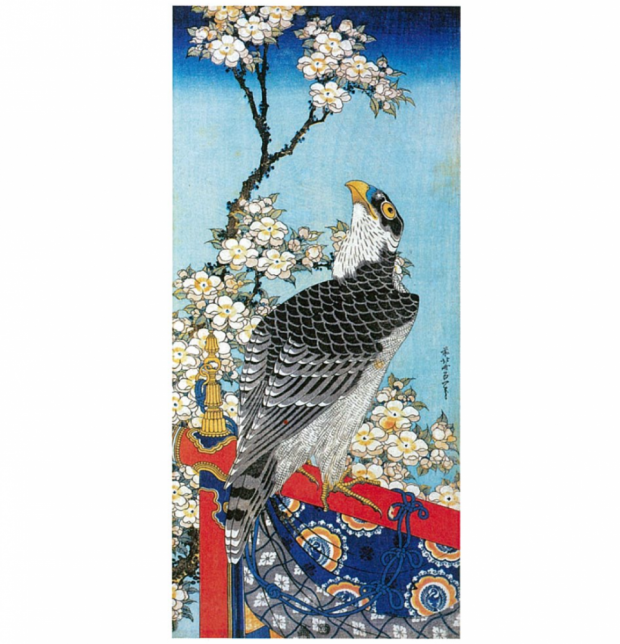 After achieving fame with his Thirty-six Views of Mount Fuji series and Waterfalls in Various Countries series, Hokusai illustrated 5 brightly colored prints in a Birds and Flowers series. Here is one of the images featuring the handsome and gallant figure of a hawk perched before a large splay of cherry blossoms. As in his landscape and genre prints, Hokusai constructs his own original world within his flower and bird designs too. It is believed that this hawk somehow represents the artist Hokusai. 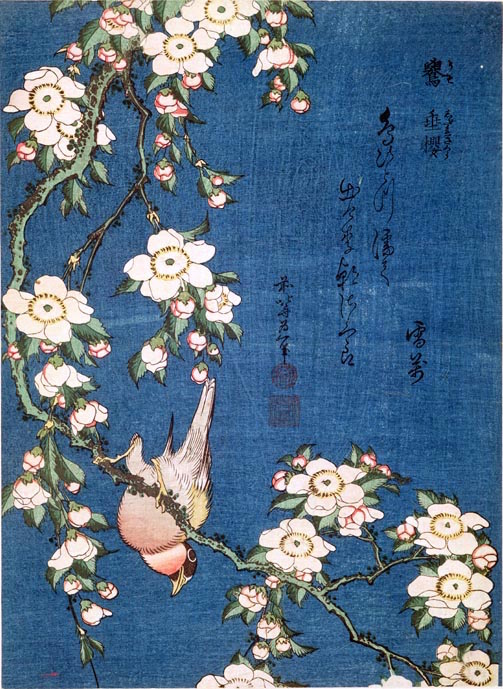 Bird and flower paintings are what could be called the mainstream of Japanese art since ancient times. While this genre was also quick to appear in the world of ukiyo-e, bird and flower pictures enjoyed great popularity in the Tenpo era (1830-1844) of the Edo period. As a result, Hokusai produced many bird and flower drawings such as this one from his medium-sized, 10-piece Bird and Flower series. The striking one-color indigo-blue background bears a close resemblance to Ogata Kōrin’s “Red and White Plum Blossoms”. Hokusai then placed a branch of weeping cherry blossom bearing bloom after bloom of delicate flowers, and perched among the blossoms viewers can find a bullfinch. It is from this work that we can see Hokusai’s keen sense of color.