Though Jean-Michel Basquiat and the Japanese artist, Katsushika Hokusai, may not seem to have much in common, both artists featured a manic imagination that flits between this world and the next.

Basquiat jumped into the limelight as a graffiti artist and became the star of the pop art world in the 1980s. The energy and frenzy of the bustling streets of New York appear to have been directly transferred to his canvas, overwhelming viewers even now. Basquiat portrayed the essence of things in his electrifying Neo-expressionist paintings, and filled each canvas with simple yet powerful social commentary often on the topic of power structures. In particular, we take a look at his painting “Untitled (Black Skull) 1982,” which can be seen here. 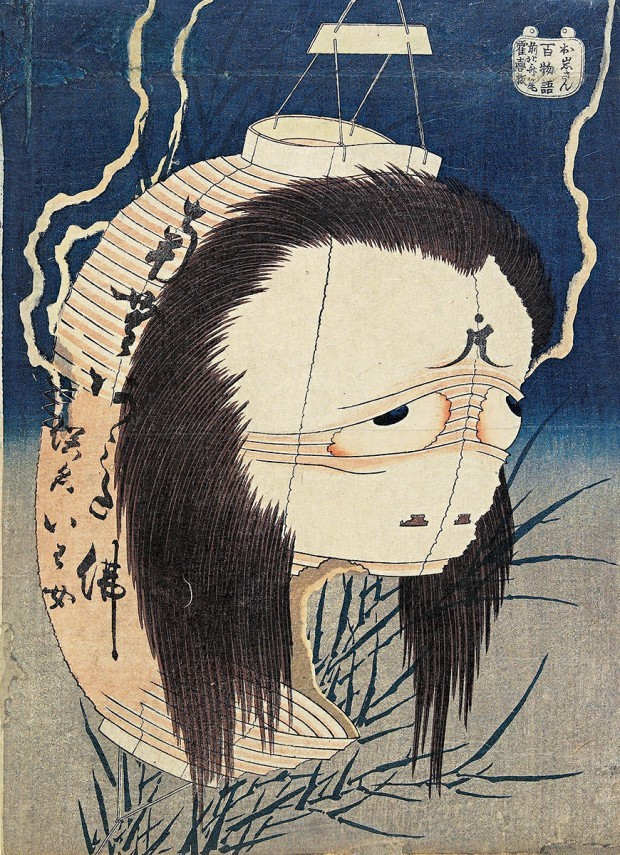 The image below is an ukiyo-e print from the series, One Hundred Ghost Stories, which was produced in the same period as the Thirty-six Views of Mount Fuji series. It portrays the ghost of Oiwa from the Tokaido Yotsuya Kaidan, a famous kabuki theater play about betrayal, murder, and the supernatural. In the ghostly tale, Oiwa’s face becomes disfigured after her husband’s lover gives her poisoned face cream, and after her death, Oiwa’s ghastly face often appears to haunt her husband. Hokusai’s touch can be seen in the amusing charm that he bestowed Oiwa in his depiction of her as a paper lantern.

Basquiat and Hokusai. This is probably the first time that their works of art have been compared, but these two pieces have much in common in that, they were both strongly conscious of the afterlife while in this world, and the two artists succeeded in visualizing that world in their art. And above all, their energetic imaginations give you the shivers.