The Mucha Style: An Art Nouveau,Art of Ukiyo-e, and Shōjo Manga

The flat, graphic design-like look and floral motifs of Art Nouveau, and one of the movement’s most influential artists, Alfons Mucha (1860-1939), took inspiration from Japanese art. In an interesting turn of events, it was Mucha’s ornate artwork that went on to influence a major group of shōjo manga artists. 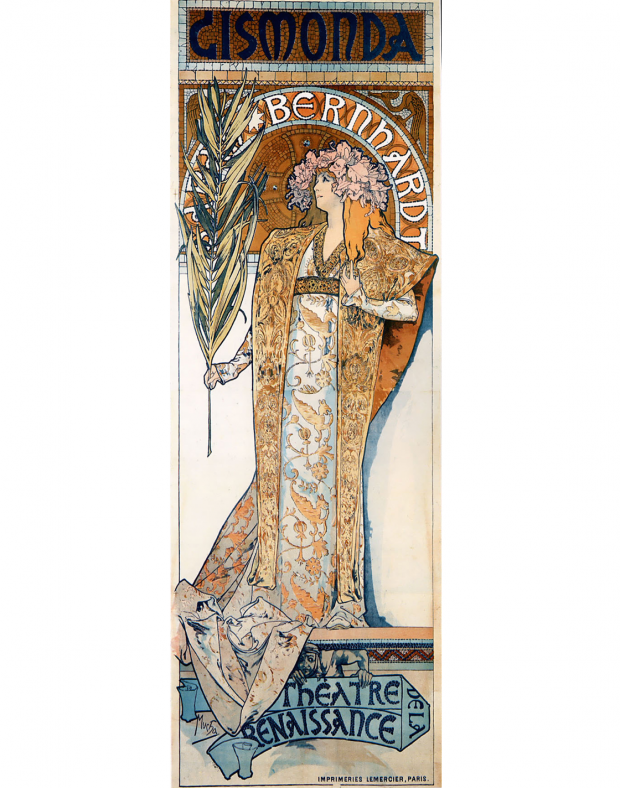 A lithograph poster for Victorien Sardou’s “Gismonda” starring Sarah Bernhardt at the Théâtre de la Renaissance in Paris. Dated to 1894 by Mucha. From Art Renewal Center.

The Czech painter and decorative designer, Alfons Mucha dubbed the “King of Art Nouveau,” gained attention at the very end of the 19th century initially for his poster depicting the famous actress Sarah Bernhardt in Paris with “Gismonda.” From then on, his distinctive style featured in many paintings, illustrations, advertisements, and posters as well as designs for jewelry, wallpaper, and theatre sets.

His subdued pastel colored images of beautiful young women dressed in Neoclassical-esque robes were called “The Mucha Style” in the beginning. Other characteristics of his stylistic designs were the fairly flat, yet ornately decorated backgrounds against which his fashionable women were depicted, and the impression of movement in the women’s figures. Due to the great success, fresh style, and charm of his works, Mucha’s style was often imitated and went on to be labeled as “Art Nouveau” (the French words for new art), and fathered the Art Nouveau movement. Part of the Mucha Style success lies in its appeal across various forms of media.

Did you know that the flat, elaborately detailed styling and floral motifs found in Mucha’s work were greatly inspired by Japanese art? His designs were particularly influenced by Japanese woodblock prints known as ukiyo-e! Alfons Mucha joins the ranks of many other Western artists and architects such as Van Gogh, Cézanne, Monet, and Frank Lloyd Wright who discovered inspiration from the innovative techniques of Japanese ukiyo-e artists such as Hokusai and Hiroshige.

On a slightly different note, a visitor to the Mucha exhibit in Tokyo earlier this year commented that the graceful women with their flowing hair and lovely expressions were very shōjo-esque. And indeed, it seems as though the Mucha Style did influence Japanese artists and eventually, shōjo manga as well. The shōjo genre of manga (Japanese comics) is aimed at teenage females and often focuses on romantic relationships and emotions. The pioneering and greatly influential Year 24 Group of shōjo artists who focused on exploring one’s inner self is also said to have adopted the Mucha Style.

Art to move and inspire 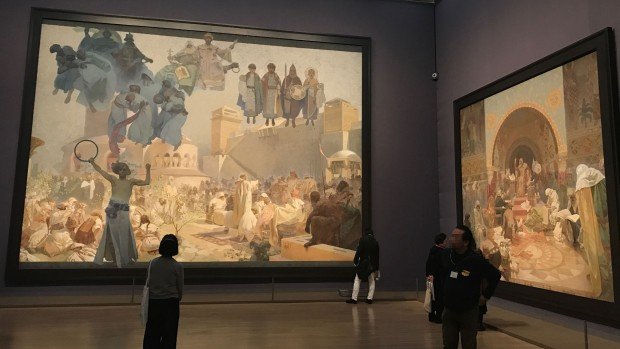 A scene from a previous exhibition with “The Introduction of the Slavic Liturgy” in view.

Despite the popularity of Mucha’s posters and advertisements, he wanted to emphasize the spiritual message of art, and not to be regarded as a mere commercial artist. Inspired by the emotional resonance of Baroque art, Mucha turned to art.

In what he considered his greatest lifetime work, Mucha painted The Slav Epic series consisting of twenty large canvases. Within these paintings, Mucha depicted the mythology and history of Czechs and other Slavic peoples in celebration of Czechoslovak independence. His dramatic and poetic treatment are breathtakingly beautiful, yet viewers may be surprised at how political the artist was in his later years. Or, as one of our staff mentioned, viewers may be surprised at how burly some of the angels are in “Holy Mount Athos”! 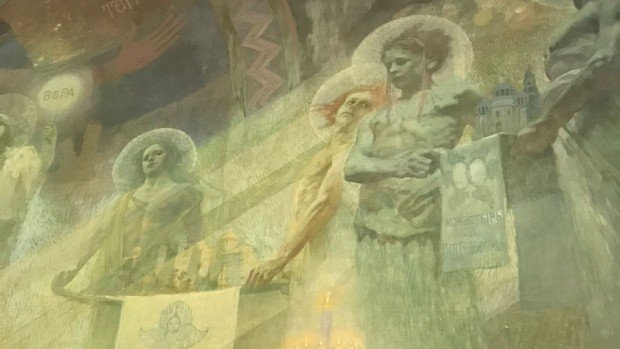 A selection from “Holy Mount Athos” in Mucha’s The Slav Epic series which features descending angels.

These enormous paintings stand as testaments to both Slavic culture and to Mucha’s artistic skills. The twenty pieces recently traveled to Japan and were displayed together for the first time outside of Czech Republic at the “Alfons Mucha” exhibit at the National Art Center, Tokyo. Visitors enjoyed the richness of expression and feel an array of emotions at the grandeur of these works and the patriotic hope that imbues Mucha’s later illustrations and paintings. The combination of Mucha’s beautiful colors and soft expressions in addition to the hopeful and energized messages he conveys surely lifted the spirits of any visitor.

The following exhibitions have closed. 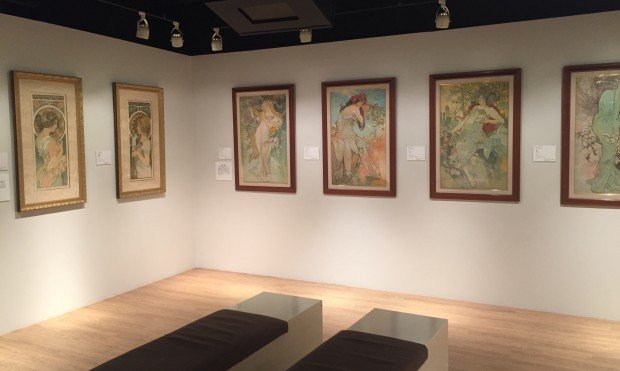 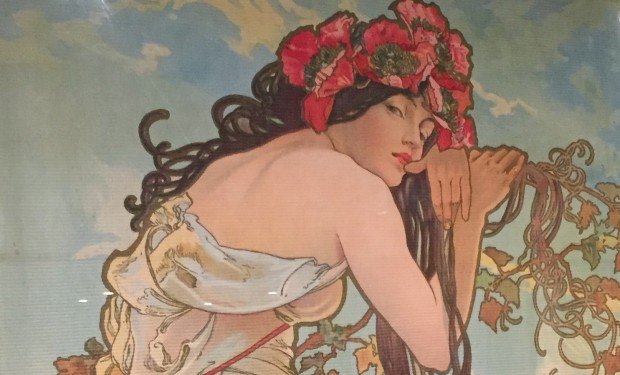 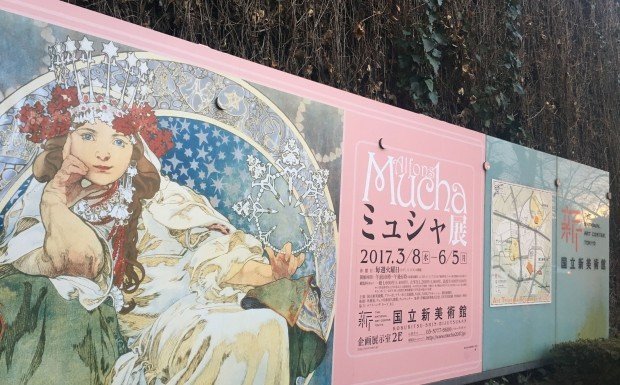