The Enchanting Vixens of Japanese Folklore

Several famous 狐 (kitsune, foxes) appear in Japanese folklore with supernatural qualities. What kind of image do these magical creatures have? According to Japanese tales, kitsune have the ability to shape shift into human form, and both their powers and wisdom increase with age. Let’s take a look at a few characters to better understand this popular character in Japanese culture. 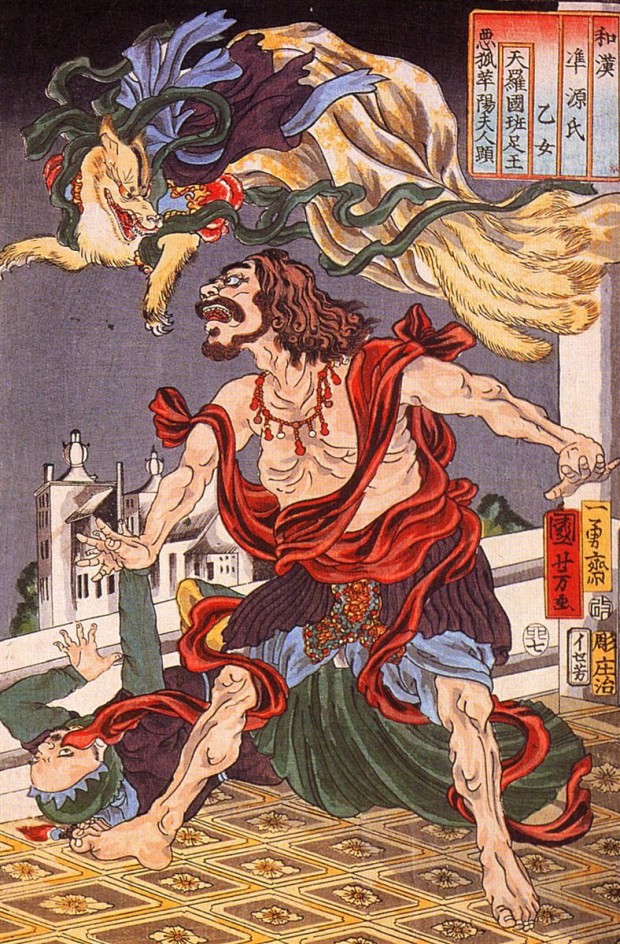 As mentioned above, according to Japanese lore, mature kitsune of 50 or even 100 years of age had the ability to transform into humans. Though they could shape shift into men, women, young, or old, foxes were often described as taking on the disguise of beautiful women. In fact, there was a superstitious belief that any woman discovered alone around dusk, the time of day when foxes become active, was probably a fox spirit herself.

Many legends in the Otogizōshi, other Muromachi period (1336-1573) works, and Edo (1603-1868) folklore also feature foxes who possessed or transformed into beauties for men – sometimes to thank them for a favor, or at other times to trick them. When it came to more malicious tales of foxes deceiving men of power, often a nine-tailed kitsune is revealed to be the culprit. In a previous article, we introduced a 九尾の狐 (kyūbi no kitsune, nine-tailed fox) a motif which originated in China, who brought about the end of the Shang dynasty.

Supposedly, this same fox spirit escaped to India and then wreaked havoc as Lady Kayō in India. In the woodblock print shown above, the Indian Prince Banzoku is being tormented by a nine-tailed fox who wears the garments of his lover, Lady Kayō. Whether is lover was possessed by the spirit or originally was a fox spirit depends on the various accounts. Returning once again to China as Bao Si, the same fox spirit ended another dynasty, this time the Western Zhou dynasty before finally making an appearance in Japan. 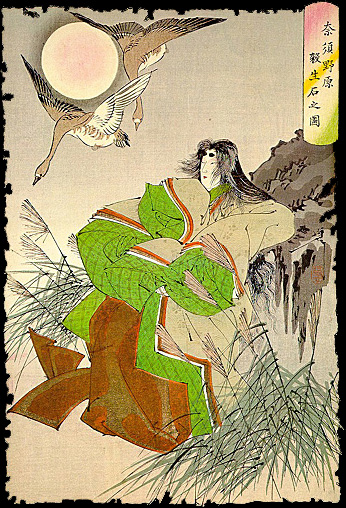 In Japan, the legendary nine-tailed kitsune arrived reincarnated as the reputedly stunning and intelligent Tamamo-no-Mae, a concubine to Emperor Toba. The supernatural creature however was causing the Emperor to grow ill and eventually when her identity was discovered, she was forced to flee.

This ukiyo-e print by Tsukioka Yoshitoshi entitled “Tamamo-no-Mae” from his “New Forms of Thirty-Six Ghosts” (1889-1892) series depicts the kitsune in her human transformation. She stands before susuki pampas grass representing the fields of Nasu where, according to legend she met her end. Behind her form we find the volcanic rocks called Sessho-seki of Nasu that the kitsune’s spirit were said to haunt.

Not all fox women, however, harbored ill intent towards their partners. In particular, the non-nine-tailed kitsune tended to be characterized as beautiful and loyal partners. Though the common unfortunate theme existed of these women fleeing their husbands and families once their kitsune nature had been revealed, there examples where kitsune would return to their lovers only at night as in the story of Ono of Mino also exist.

The tale of Kuzunoha 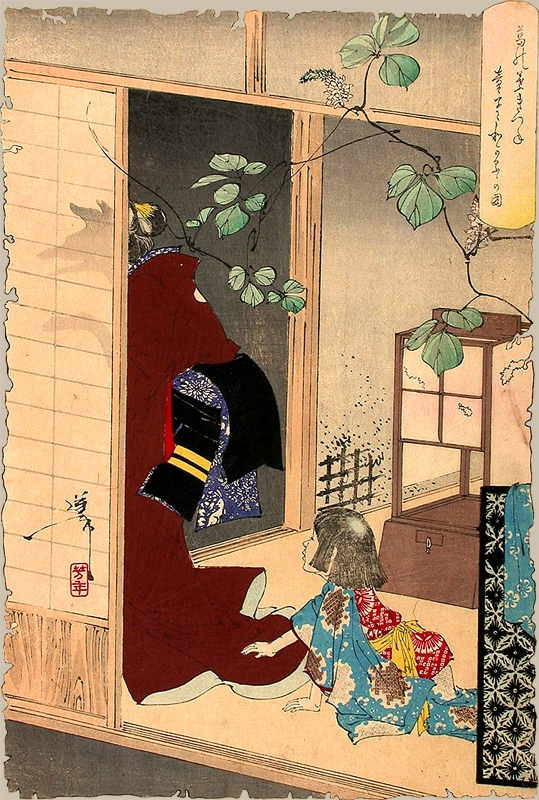 The story of Kuzunoha serves as a popular theme for kabuki theater and bunraku puppet theater. Though many variations of the tale exist, the basic premise is that a man saves a fox. Unbeknownst to the man, the kitsune transforms into a beautiful lady and becomes his wife as a way to express her gratitude. Together they have a child who is sometimes rumored to be the 陰陽師 (onmyōji, Imperial diviner) Abe no Seimei.

At one point, Kuzunoha’s true nature comes to light, though how varies from story to story. In some cases, her child discovers her tail, which she failed to conceal. This ukiyo-e print by Tsukioka Yoshitoshi illustrates such a scene of discovery right before it will occur for maximum tension. If you look closely at the shoji screen, you will notice that Kuzunoha’s shadow is that of a kitsune and not of a human. Popular ways to reveal the identities of shapeshifting 妖怪 (yōkai, spirits) like kitsune included them being frightened by dogs and inadvertently returning to their fox forms, or accidentally revealing their tails or shadows in a moment of carelessness.

The mysterious kitsune continues to fascinate us today

Other legends of diviners, samurai warriors, or monks befriending foxes to gain their omniscient powers and anecdotes of foxes creating fantastical illusions or flying in the air exist. All in all, foxes were considered to possess special powers and treated with suspicion and respect. Depending on the kitsune’s form and also depending on a person’s belief, kitsune can be seen as anything from lucky 神 (kami, divine spirits) such messengers to the gods at Shinto shrines, to clever and playful yōkai, and all the way to dangerous, corrupting entities. Despite their lengthy history and varying personalities, kitsune continue to enchant people today. These popular fox spirits have materialized again and again in popular culture as the inspiration for the Nine Tails and Vulpix characters in “Pokemon” franchise and Kyubi in the comic and animated series, “Naruto.”