The Power of Design in Japanese Rimpa Folding Screens

Often, the decorative style or sensibility in Japanese art known as 琳派 (Rimpa, alternately spelled Rinpa) offers an exaggerated and poetic expression of Nature. Simplified yet extremely detailed and presented in bold colors, crisp forms, the natural subjects take on an ornamental and abstract quality. In other words, Nature refined; Nature as design. Rimpa presents the natural world with a more direct and emotive approach. Examining 3 famous Rimpa screens shows us how a “Rimpa look” is achieved and to what aim the bold designs serve.

While Rimpa artwork encompasses ceramics, lacquerware, and textiles, perhaps its more recognizable medium is that of painting. This time in particular, we focus on Rimpa’s iconic 金屏風 (kin-byobu, folding screens covered with gold leaf) and three aspects that lend these works their almost pop art and graphic design-like qualities—stylized, abstracted forms, the asymmetrical yet harmonious use of negative space, and the three-dimensional nature of the screens themselves. The combination of these characteristics produces the Rimpa aesthetic, an effective and emphatic use of design.

Conveying the energy of spring

First, let’s take a look at perhaps one of the most representative works of the Rimpa style, Ogata Korin’s (1658-1716) “Red and White Plum Blossoms” screens. The artist presents a fresh interpretation on the traditional theme of rivers and plum trees with a dramatically cropped scene and an abstract color scheme. Though asymmetrical, the dark and organic curving forms of the water and trees standing opposite on the two screens strike a delicate and harmonious balance against the bright gold background. This type of carefully curated contrast can be seen repeatedly throughout this work. 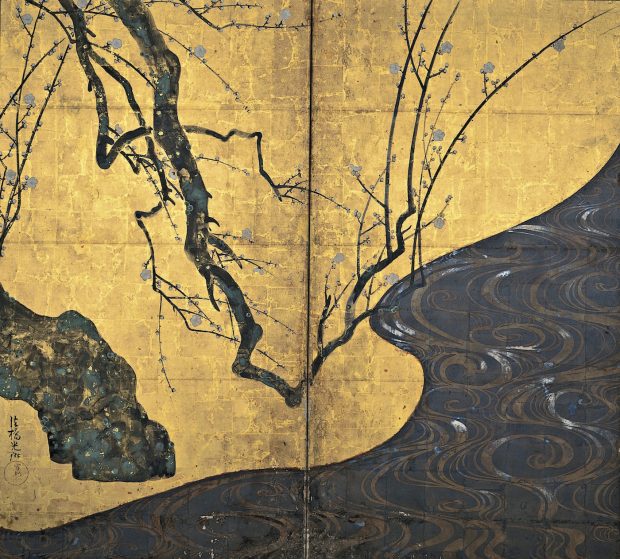 Lefthand side of “Red and White Plum Blossoms” screen.

Directing our view towards the winding form of the river, we discover that Korin describes the movement of water with an abstract swirling pattern. This striking rendition of moving water is characteristic of Korin and highlights his excellent sense of flat decorative design. Despite the flatness and basic shape of the river, the forms of the two trees feature rich details with color modeling to depict texture and spots of colorful green moss. The gnarled branches and scattering of plum blossoms and buds decorating the tree limbs create a rhythmical quality that pairs well with the swirling “S” shaped wavelets.

Though dynamic in impression, Korin has painted nothing else aside from the river and two plum trees. Thanks to the effective use of negative space, comprised of shimmering gold leaf, as the imagined ground from which the trees grow and the river runs, the work feels complete. In addition, the application of gold lends a powerful warmth to the image. When setting up the pair of screens, the three-dimensional quality of this medium comes to life and reveals Korin’s design skills.

Not only does the river appear to flow from the back and stream forwards towards the viewer in a dramatic scene, but the bright colors combined with the energetic expressions of movement make these screens a symbolic depiction of the euphoria and vitality of early spring.

Capturing the suspense of an ancient performing art

Let’s turn to another well known Rimpa work, the “Bugaku Dance” screens by Tawaraya Sotatsu (died 1643). This work serves as another good example of Rimpa’s characteristic use of dramatic, close-up cropping and negative space.

At first glance, the figures of several dancers seem to float about thanks to the contrast between the gold background and their colorful garments that seem to pop from the screen. Yet, they are simultaneously grounded and balanced with the addition of the pine tree in the upper left and taiko drums in the lower right. The creative cropping and delicate balance produces an underlying tension that conveys the mystical, sublime feeling of Bugaku dance itself. This elegant ancient dance was performed and viewed by only the Imperial court until modern times, and contains divine and ritualistic qualities. 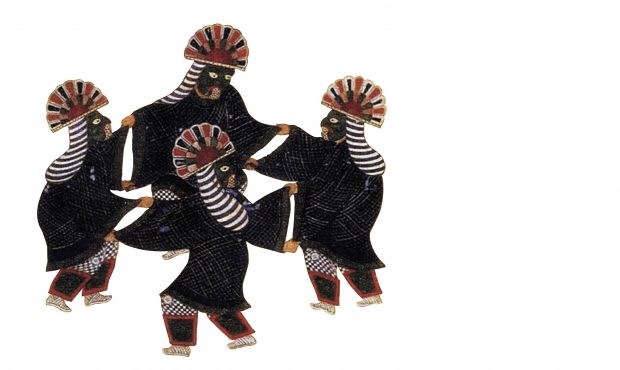 Sotatsu illustrates 5 types of Bugaku Dance in this screen. The above 4 figures wear costumes and form a circle to represent flying cranes.

In between the pine tree and taiko drums, the negative space can also be imagined as an otherworldly space in which the realm of the gods blends into our physical world, represented by the static figures of the tree and drums. As such, the twirling dancers impersonating divine beings and mythical beasts become the supernatural characters they enact and appear suspended, floating in the heavens.

Stepping into a story

In this other pair of screens, “Narrow Ivy Road, also designed by Tawaraya Sotatsu, we once again encounter how the Rimpa sensibility effectively utilizes the medium used when designing a piece. As you may notice, only the abstract forms ivy leaves and the tops of embankments are painted green upon a field of gold. The gold background takes from the tradition of やまと絵 (Yamato-e, a classical style of Japanese painting inspired by Tang dynasty paintings), while the mixing of thin and more concentrated layers of ink for a gradation effect derives from the art of 水墨画 (India ink painting). 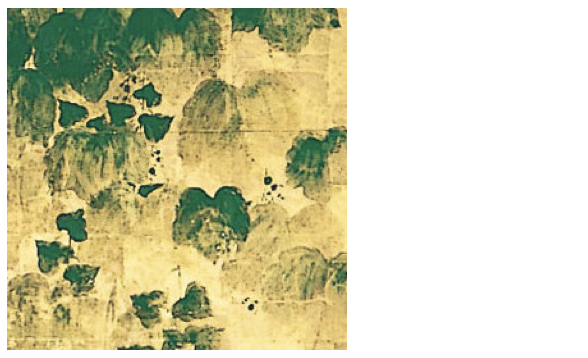 At the top of the screens, 7 stanzas of poetry ascertain that the idea for this scene derives from “The Tales of Ise” in which the protagonist, the exiled noble Ariwara no Narihira (825-880), travels along a narrow road with ivy-covered walls with a heavy heart. While the setting and widely-recognized poetry sparks the imagination of viewers to episodes of the hero’s journey, no figure of Narihira is to be seen.

Instead, when the screens are set up, the viewer becomes immersed in the landscape. The folds of the screens create the effect of never-ending hills with poetic stanzas floating above. In this moment, Sotatsu has designed it so that viewers step into the story and become the character Narihira themselves. With the essence of landscape and mood set, this cleverly designed Rimpa brings literature to life.