Kobaien: The Art of Inksticks in the Old Capital City of Nara 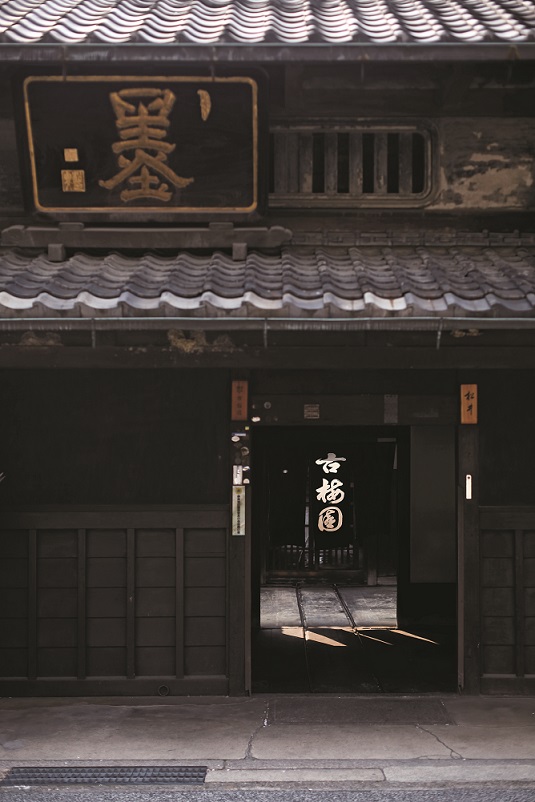 “The fragrance of inksticks floats in the air at Kobaien in the old capital of Nara,” goes a 俳句 (haiku, a traditional form of Japanese poetry consisting of 3 lines with 5-7-5 syllables) by celebrated Japanese novelist Natsume Soseki (1867-1916). Today, more than a century later, the subtle scents of Kobaien’s inksticks — small bars of dried ink for making the ink used in traditional East Asian calligraphy and painting — continue to enchant visitors to this shop near the historic temple Kofuku-ji. 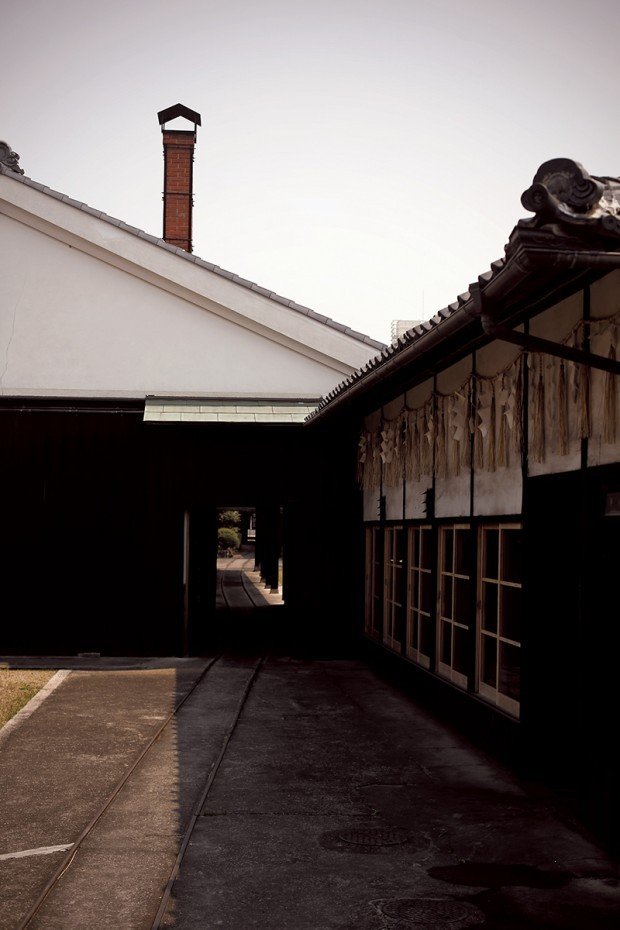 Rails that convey carts of inksticks stretch toward the back of the premises.

Last year, Kobaien turned out as many as 60,000 inksticks — all delicately crafted by its small team of five artisans. The extremely meticulous process involves kneading soot with animal glue, adding fragrances, carefully molding the mixture into the desired shape, and then slowly drying it into its finished form.

Over the years, many inkstick makers throughout East Asia have adopted machinery and other shortcuts to this laborious process, so Kobaien’s commitment to handcraftsmanship attracts a steady stream of discriminating customers from not only across Japan, but also other countries such as China and South Korea. 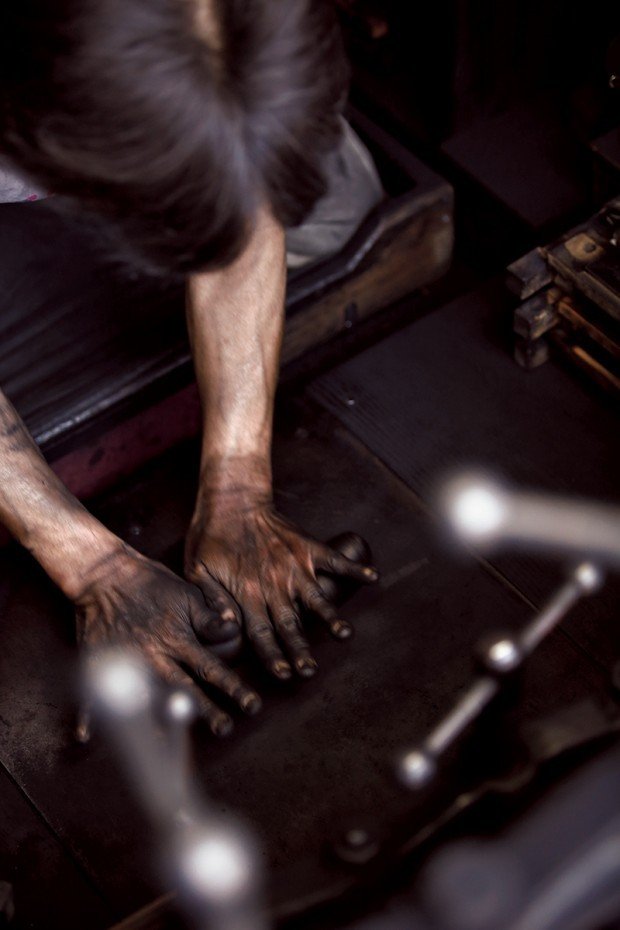 Animal glue heated in a bain marie is added to soot and the mixture is kneaded until the artisan is practically covered in black. The dexterity of kneading makes or breaks the inkstick’s quality.

The art of inkstick making is believed to have been brought to Japan in 610 by a Korean monk named Damjing. As 仏教 (Buddhism) flourished in the Nara period (710–794), demand exploded for the inksticks needed to copy sutras, transforming Nara into an inkstick capital almost overnight. Sometime around 1400, the city’s inkstick makers began using soot from oil burned in lamps at Kofuku-ji rather than the traditional soot derived from pine resin. Since the finer oil soot produced deeper, sublime hues of ink, the new inksticks soared in popularity and quickly became a Nara trademark.

This now classic technique has been lovingly guarded by Kobaien ever since its founding in 1577. The shop even produces its own soot in a traditional mud-walled storehouse where vegetable oil, most often rapeseed, is burned in 200 unglazed ceramic vessels. The resulting soot collects on earthenware placed above the burners, and is later scraped off for use. All 200 burners are closely watched and fine-tuned by one of the more experienced artisans, since flame height affects the soot’s quality, as do other variables, such as the type of oil used. This painstaking method is no longer practiced by any other inkstick shop, even in Nara. 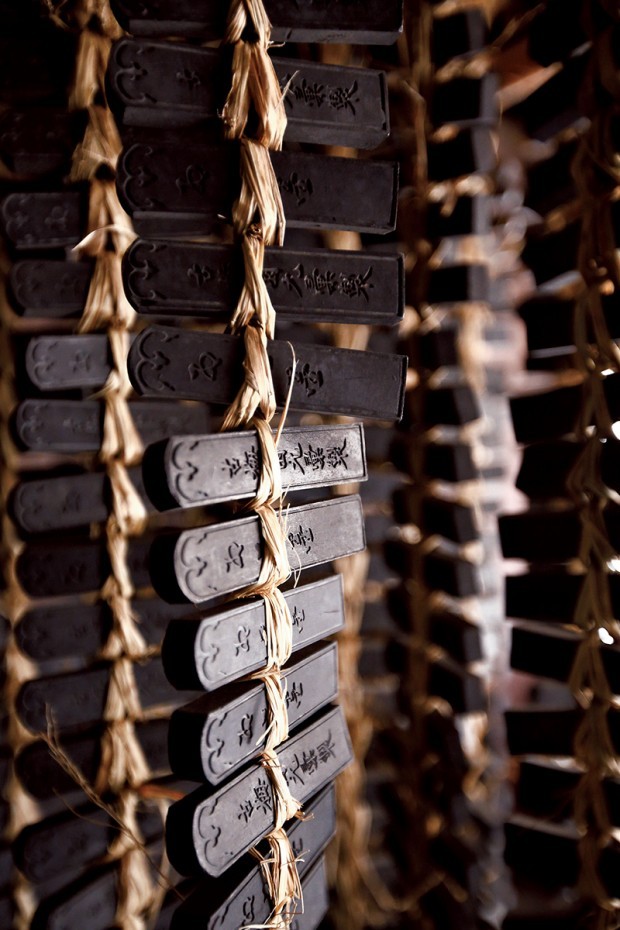 After being buried in wood ash to reduce their moisture content by 70%, inksticks are suspended from the ceiling to dry naturally for around two weeks to three months.

Handcrafted inksticks are more than just everyday utensils for calligraphers and artists—their inspired quality and shapes also make them works of art. Kobaien’s refined craftsmanship is the product of several brilliant forebears, including the shop’s sixth-generation proprietor, Gentai, who was born in 1689. Living in an era when the shogunate strictly limited contact with the outside world, Gentai miraculously received permission to meet with Chinese experts in Nagasaki and gain their advice on how to transform his homemade soot into inksticks. His successor, Gen’i, fervently studied the properties of various glues derived from not only cattle and deer, but also other sources such as fish, plants, and even the hide of an elephant from Vietnam, given to Kobaien by the shogunate after the pachyderm died in captivity. Through these and other visionary pursuits, a long line of master artisans built up the superlative expertise and aesthetics that define Kobaien’s artistry. 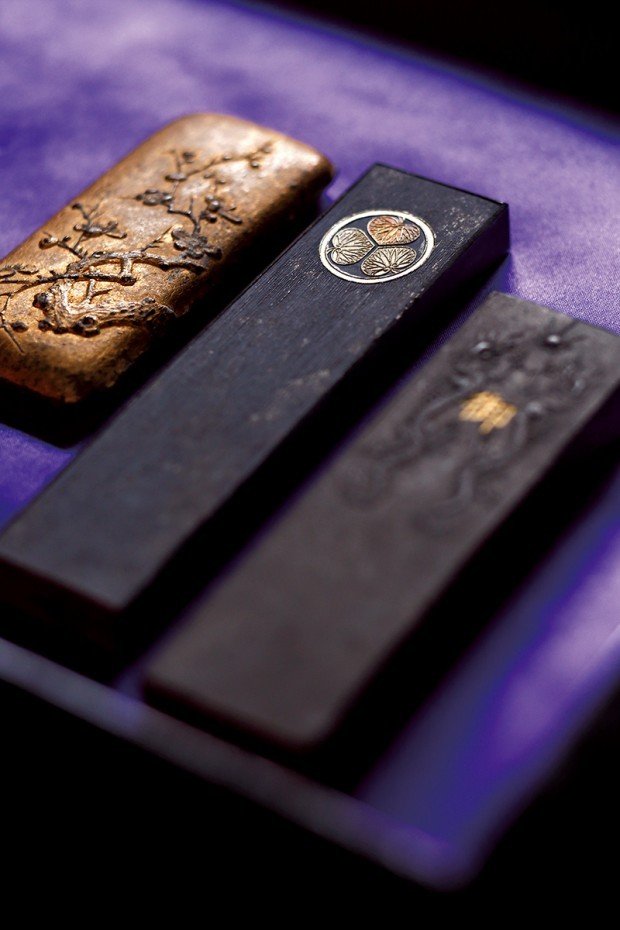 The shop has a heritage collection that includes inksticks supplied to the Tokugawa shogunate.

The exquisite inksticks produced by this shop are truly a sight to behold, and a sound to hear—gently clap two together and you’ll hear the distinctive clink that attests to how fastidiously each one was dried. And, when you start to make ink by slowly grinding an inkstick in water on an inkstone, you can immediately feel the solid, sturdy construction that comes from handcraftsmanship. As you grind more, the inkstick releases its dainty scent and transforms the water into a lustrous pool of jet-black ink, allowing you to experience the wonders of this simple yet fascinating utensil that has quietly helped to preserve and grow Japanese culture over the centuries as people used ink to record history, communicate knowledge, and create art.