An ancient tradition in the ancient capital of Japan

July—summer in Kyoto means the 祇園祭 (Gion Matsuri). The nearly 1,200 year-old festival for 八坂神社 (Yasaka Shrine) spans the entire month of July with a range of various events, from traditional rituals to elaborate processions, and fills the city with a vibrant energy. The most popular activity is the 山鉾巡行 (Yamaboko Junko) parade on July 17, which takes place between 9:00 and 11:30 in the morning.

This spectacle features 32 floats made up of two different types, called yama and boko, from which the event derives its name. The 9 elaborate hoko floats can be so large and heavy as to require a team of 50 men. The magnificent display draws huge crowds every year to the ancient capital of Kyoto and its famous geisha district, Gion. Gion Matsuri begins with the 御霊会 (goryo-e, a type of purification ritual), to appease the plague and disaster-bringing spirits of the deceased. Preceding the popular Yamaboko parade on July 17, are lively street parades that set the Gion district in a fervor. Three nights of raucous street parades lead up to the grand parade, and are respectively called Yoi-yoi-yoi-yama, Yoi-yoi-yama, and 宵山 (Yoiyama). While they may be lesser known among Gion Matsuri’s many sightseers, this cherished tradition remains popular among locals and is quite the sight to behold.

At the Yoiyama street festival, the streets ring with the sound of music

The Yoiyama street festivals serve as a sort of countdown to both the Yamaboko parade and the transfer of Yakasaka Shrine’s deities on July 17. Let’s take a glimpse at one of Gion Matsuri’s lesser known yet wildly exciting events. In each neighborhood, the streets are packed with people admiring the Yamaboko floats and other decorations on display throughout the town. Meanwhile, festival music called Gion-bayashi fills the air with an electric atmosphere. Stalls serving festival food add to the excitement. People who carry the floats gather around in their matching cotton yukata, while children sell chimaki cakes wrapped in bamboo leaves to ward off evil. They chant that these auspicious foods are available for one night only.

On the final evening preceding Gion’s crowning parade, festival music rings out through the neighborhoods at around ten o’clock. Groups of musicians in each area of town play music aboard the larger floats as they are paraded through the streets. A chorus of gongs, taiko drums, and Japanese flutes can be heard practicing outside the town council hall prior to their departure. The music serves as part of a ritual requesting good weather for the following day’s big event. 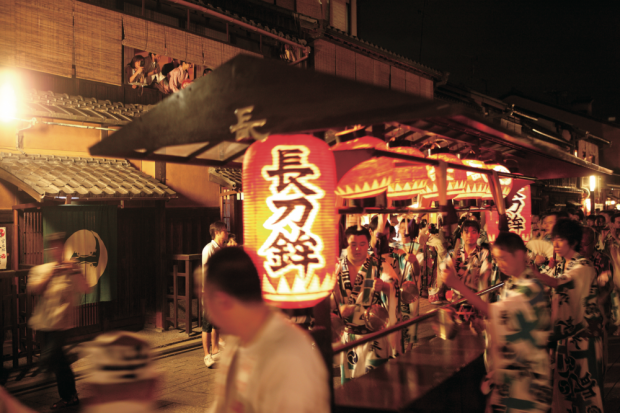 The scene – a procession appears before the bar lounge Tsudaro that sits along a small street known for its cherry blossoms in the geisha district of Gion. Excited viewers watch as a procession of paper lanterns held aloft on bamboo poles passes through the street.

With this, the Yoiyama street festival is in full swing and people are in high spirits for the Gion Matsuri’s main events.

Soaking it all in: Onsen and Communal Bathing Culture in Japan