The Yōkai in Japanese Art—What are They?

An expert’s take on yōkai

We talked with a Japanese art historian who served as a supervisor for the large-scale 2016 yokai exhibit, “From Eery to Endearing: Yokai in the Arts of Japan,” Professor Yasumura Toshinobu to learn more about yōkai. What exactly are yōkai? And what is it about them that fascinates us? Here is what he revealed. 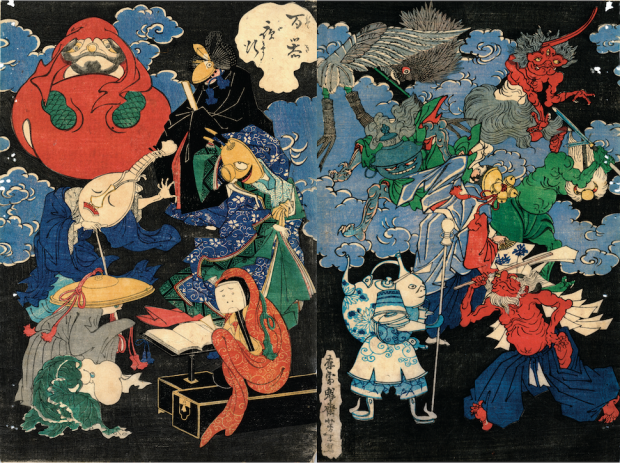 Tsukioka Yoshitoshi’s comedic parody “Hyakki Yagyō”, which is stored at the International Research Center for Japanese Studies. These prints depict rather humorous characters rather than frightening demons.

Some background on the word, “yōkai”

The term yōkai came into common usage from the Meiji era onwards, and until then, the inhabitants of the nether world were referred to as oni (demons) and bakemono (ghosts or monsters). Towards the end of the Heian period in the 12th century, oni and bakemono started to appear among the annals of Japanese paintings. During this time, the Pure Land Buddhism boom gave rise to expressions such as, “If you cannot make it to Heaven, then you will go to Hell,” and the paintings of hell genre called jigoku-e—both of which were used as tools for recruitment. Finally, it was the demons drawn in these latter jigoku-e that functioned as both the image source and origin for what we now label as yōkai.

Bad guy or good guy? Don’t judge them by their looks 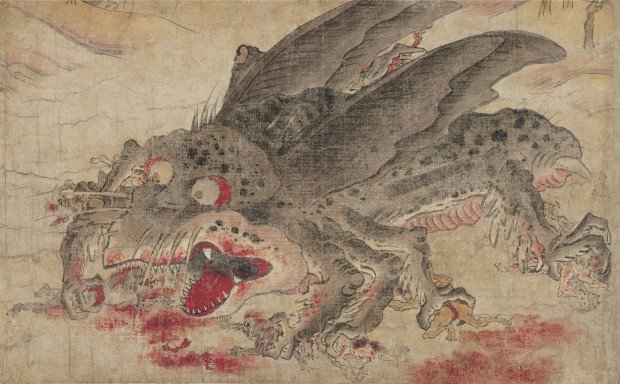 A portion of one of the paintings that comprise the National Treasure of Japan “Hekija-e” or the “Extermination of Evil” from the 12th century. It is housed at the Nara National Museum. Is this guy cute or scary?

In July, the National Treasure “Hekija-e”, or “Extermination of Evil” paintings were on display in Tokyo. One of the total of five paintings features what appears to be a large bakemono. At first glance, it seems rather unpleasant even repulsive. However, in reality, the monstrous figure munching away on evil oni is the Shinchu, or “Divine Insect.” In one day, this deity consumes 3,300 oni on our behalf. When you think of Shinchu in this way, it is no longer scary.

Accepting the idea of yōkai

During the Kamakura (1185 – 1333) and Muromachi (1336 – 1573) periods, whenever some accident or disaster disrupted the norm, it was often reasoned that,“It’s because of the yōkai (or oni).” That concept is still continued and utilized today in the worldview of the popular show, “Yōkai Watch”. In this way, yōkai gradually became something familiar to us and in turn, the yōkai depicted in art too seemed friendlier.

A selected portion of one of the oldest and most famous hyakki yagyō paintings, “Night Parade of One Hundred Demons” scroll, which was previously mistakenly attributed to Tosa Mitsunobu. Originating from the 16th century, it is now stored at Shinju-an within the Daitoku-ji grounds in Kyoto. The various yōkai depicted in the scroll above comprise of a parade of one hundred demons, a motif that is often featured in Japanese folklore called hyakki yagyō. The demons shown here are setting out for a night of fun as they run amok through the human world on certain summer nights.

For example, please look at the yōkai from the Important Cultural Property “Hyakki Yagyō Emaki” or “Night Parade of One Hundred Demons” scroll from the Muromachi period shown above. The primary objective of these guys is to frighten humans, but not to attack them. Gleefully cackling away, these yōkai merely give nobles walking around the streets of the Capital (Kyoto) a scare as they continue parading throughout the night. These yōkai were clearly drawn with a sense of humor. 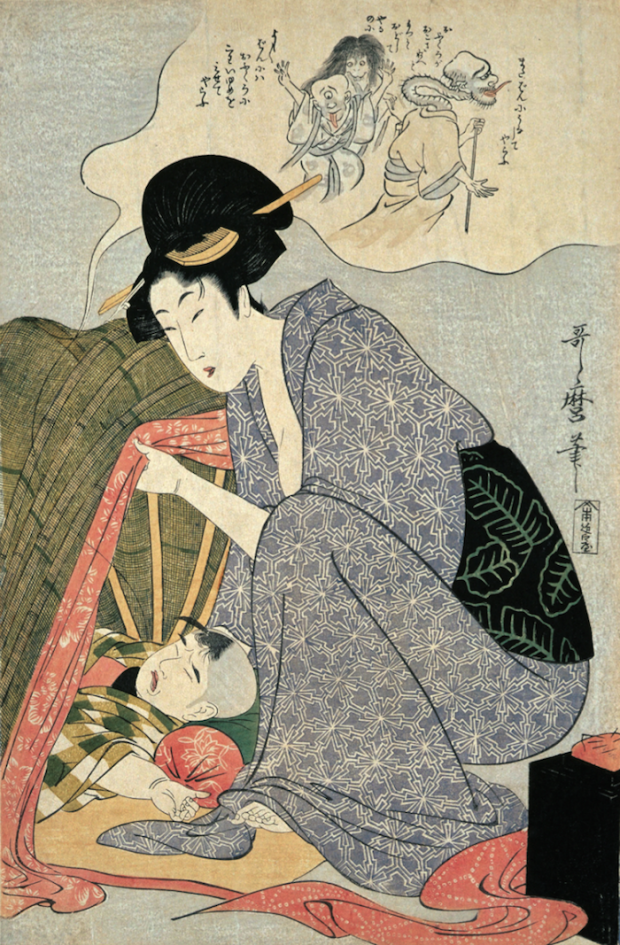 Also, the yōkai that appear in the Edo period “Ino mono no keroku” of “Ino’s Chronicle of Strange Things” scroll attempt to frighten a warrior named Heitarō, but to no avail; the young man remains unshaken. Crestfallen by their failure, the yōkai disappear. This sort of personality or aspect of Japanese yōkai is what makes them cute. As previously mentioned, they are not out to inflict harm on humans. And that’s why, we don’t dislike their existence, but rather there are qualities and parts about them that we can laugh at. 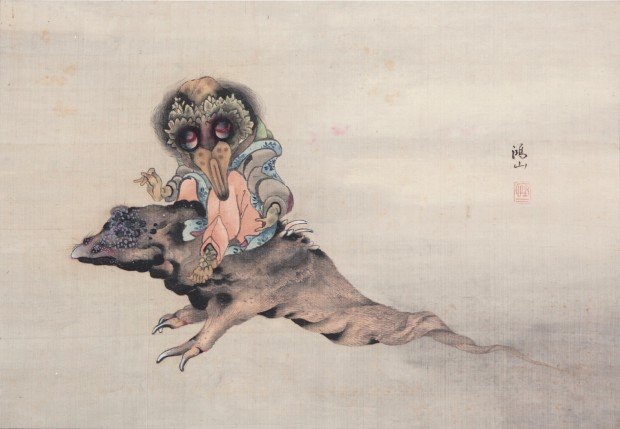 Some curious creatures in Takai Kozan’s painting “Yōkai” from the 19th century. It currently belongs in a personal collection.

At the beginning of the Edo period, the famous ukiyo-e artist Kitagawa Utamaro’s teacher, Toriyama Sekien, produced the “Gazu Hyakki Yagyō” or “The Illustrated Night Parade of a Hundred Demons”. This woodblock-printed book served as a sort of illustrated encyclopedia, it is thought that this publication spurred on the yōkai’s popularity as it spread throughout the country. Utamaro, Hokusai, Kuniyoshi, Jakuchu, and other popular artists also drew pictures of yōkai as well. Since yōkai did not exist in reality, artists could freely utilize and express their imagination. For artists, this subject proved very alluring. The idiosyncratic yōkai of Hokusai and Kuniyoshi in particular still exert a lot of influence today. Hokusai’s pupil too, Takai Kozan, almost exclusively drew pictures of yōkai in his home town Obuse in Shinshu, Nagano prefecture during his later years. While we do not know if there was a profound reasoning behind this, undoubtedly, it was also because of yōkai, wouldn’t you say?

“From Eery to Endearing: Yokai in the Arts of Japan” was on display at the Abeno Harukas Museum in Osaka until November 6, 2016. Do not despair though, yokai exhibits open every summer in Japan so another chance to view yokai is around the corner.