Despite the passage of time, the colors of Rimpa style artwork do not fade. This, combined with their highly decorative appearance captivates the heart of many art lovers outside of Japan. Another reason for the popularity of the Rimpa school lies in their characteristic graphic design-like compositions, a skill which the school’s generations of artists reign supreme.

The “Anthology with Crane Design”, a portion of which is shown above, is a scroll of beautifully handwritten poetry by Hon’ami Kōetsu interwoven with paintings completed by Tawaraya Sōtatsu. Flocks of crane take off in flight and land in this series of consecutive images producing an elegant rhythmical quality. The entire crane portion of the scroll can be seen here.

From the image above, you can see how energetic almost frenzied excitement can be felt within the painted screens “Wind God and Thunder God,” also produced by the hand of Sōtatsu.

A flair for the dynamic

Meanwhile, both of Ogata Kōrin’s masterpieces “Red and White Plum Blossoms” and “Irises” exemplify an earnest pursuit of design. Finally, Suzuki Kiitsu’s screens “Mountain Stream in Summer and Autumn” represent how the Rimpa school did not merely paint things as they are seen, but rather, the artists selected and emphasized parts to beautify reality and create an original, strongly impacting piece. 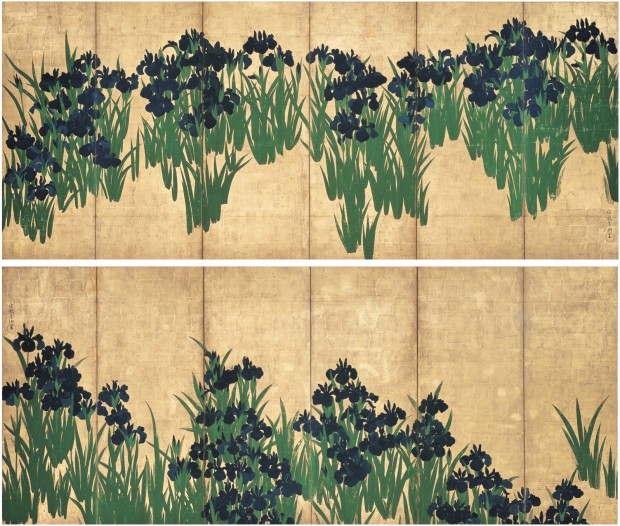 Rimpa art features such novelty and expertise in its use of pattern and design it could be called a precursor to modern graphic design, anime, and illustration. The freshness and contemporary feel imbued in the older works makes it hard to imagine them as works from hundreds of years ago. The key of course to this charm largely exists within Rimpa’s exciting compositions.

In addition, the applicability of Rimpa’s bold compositions to things other than paper also contributed to the school’s success and pioneering approaches. Not stopping at two-dimensional paintings, Rimpa designs influenced and were employed in the industrial arts and crafts, kimono, and even Japanese sweets, thus firmly establishing the Rimpa’s schools artistic prowess.

Interpreting one of the greatest Rimpa works

A highly influential work in art history and recognized around the world, “Red and White Plum Blossoms” was painted by Kōrin in his final years and considered his finest work. A current of water flows in the center of the composition, interposed between the two screens. Meanwhile, an aged plum tree bearing white blossoms and a younger plum tree decorated with red blossoms confront each other on opposite ends.

What symbolic meaning could these plum trees hold?

The stylized waves that Kōrin drew to express the flow of water can also be understood as the passage of time. This swirling pattern of mesmerizing waves would go on to be continuously used throughout Rimpa art and be attributed as “Korin’s waves.”

In the natural world, this scenario seems impossible, but when it comes to design, this perfectly symbolic layout allows for various interpretations.

A closer look at “Mountain Stream in Summer and Autumn,” the independent Kiitsu’s testament to self-expression

Suzuki Kiitsu’s “Mountain Stream in Summer and Autumn”, pair of six-paneled folding screens, color and silver on paper, Edo period (19th century), 165.8 × 363.2 cm each, in possession of the Nezu Museum.

Following the death of his teacher Sakai Hōitsu, Kiitsu painted “Mountain Stream in Summer and Autumn” as a contrast to Hōitsu’s “Flowers and Plants of Autumn and Summer.” While Hōitsu’s work is painted upon a moody, silvery background, Kiitsu uses gold. Instead of Hōitu’s field of flowering plants, Kiitsu depicts a cypress woodland. The manner in which the design is painted differs as well. Kiitsu’s screens were designed to stand as completely different from his teacher’s works, and in this break, we perceive Kiitsu’s release from any artistic expectations as a pupil he may have held and see a true experiment of self-expression.

Look carefully at one of the tree trunks… there’s a cicada! 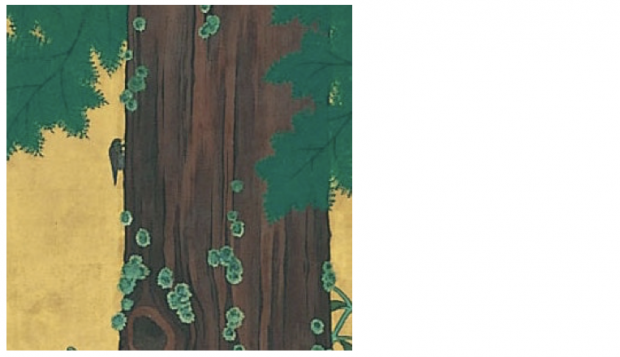 Cicadas are a common sight (and sound) of summer in Japan, and as such Kiitsu included one in his painting. Don’t miss this playful attention to detail!

This Golden-rayed lily seems rather large compared to the tree… 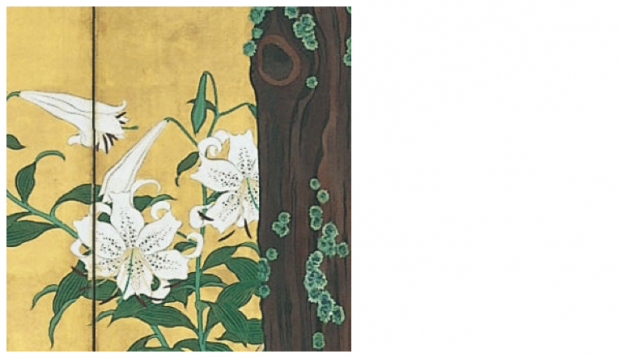 Each motif is arranged in consideration of the overall compositional balance. However, instead of feeling slightly off, the end result is a work displaying impressive cohesiveness.

The stream of water is deliberately emphasized 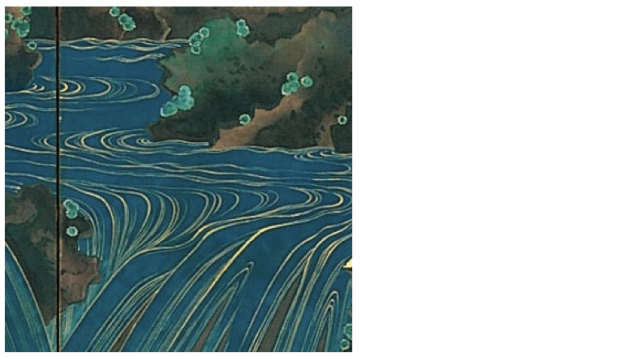 Kiitsu liberally used the expensive mineral pigment known as ultramarine made from lapis lazuli when painting the stream to vibrantly express the water. This graphic treatment of the water adds a dynamic quality to the scene.

“Irises” and “Mountain Stream in Summer and Autumn” at Nezu Museum

Many of the above works were on display earlier this year at one of Tokyo’s popular Japanese art museums, the Nezu Museum. The exhibition has finished however, but Ogata Kōrin’s “Irises” will be displayed again next spring.

Enjoy irises in the garden, which are in bloom whenever Ogata Kōrin’s “Irises” are on display at the Nezu Museum. Have fun comparing the two. 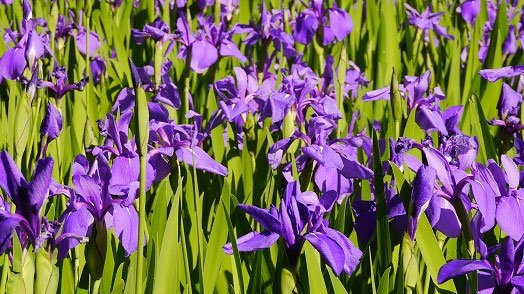