Located in Osaka as Fujii-dera Temple’s main image of worship, the “Seated Thousand-armed Kannon Bosatsu” brings new meaning to the ideas of divine intervention and the omnipresence of divine beings. A closer look reveals that this statue comprises of eleven heads, a total of 1,041 arms, and an impressive count of over a thousand eyes. Why? This popular Japanese deity embodies compassion, and its extra eyes ensure that no suffering is overlooked, while its many limbs can reach all those in need.

Adding up to be a one of a kind example 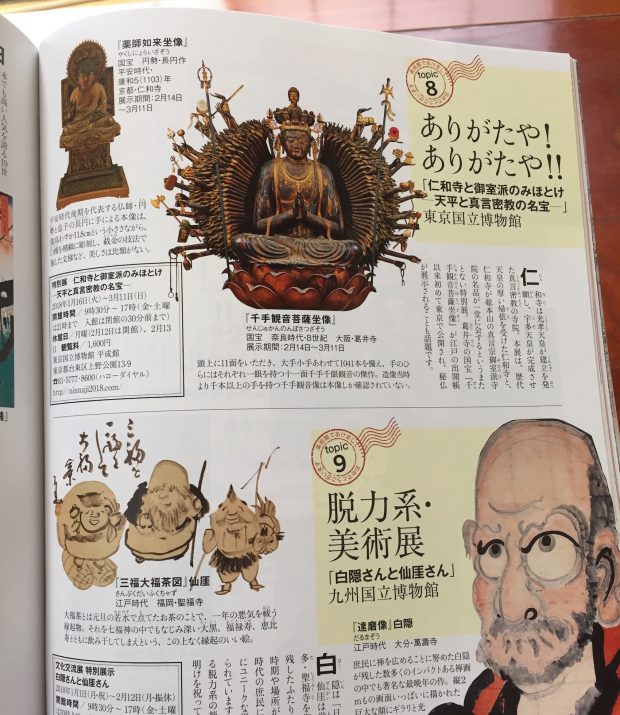 Waraku Magazine featured the 「千手観音菩薩坐像」 (Senjukannon bosatsu-zo, “Seated Thousand-armed Kannon Bosatsu”) in its February・March issue as the wooden lacquerware sculpture is now on display at the Tokyo National Museum’s “Treasures from Ninnaji Temple and Omuro” exhibit until March 11. This exhibit marks the first time since the Edo period (1603-1868) that Fujii-dera Temple’s statue has been publicly shown in Tokyo. Aside from being designated as a National Treasure, the “Seated Thousand-armed Kannon Bosatsu” is also thought to be the oldest remaining statue of its kind.

Dating back to the 8th century, this statue is a masterful example of a 十一面千手千眼観音 (Juichimen senju sengen Kannon, “Eleven-faced, thousand-armed and thousand-eyed Kannon”). Worship of the thousand-armed Kannon, a manifestation of the bodhisattva Avalokiteshvara, began in the early Nara period (710-790), but many images’ arms do not actually number to a thousand. Some like the closest surviving example at Toshodaiji claims a remaining 953 arms, while other works merely had multiple limbs to create the impression of a thousand arms.

Aside from its 2 main arms held together in prayer above the deity’s lap, the Thousand-armed Kannon at Fujii-dera Temple was found to include an additional 38 large arms clutching a variety of Buddhist ritual objects and weapons such as spears, bells, and mirrors, plus 1,001 small arms. It remains the only known example to exceed a thousand arms. 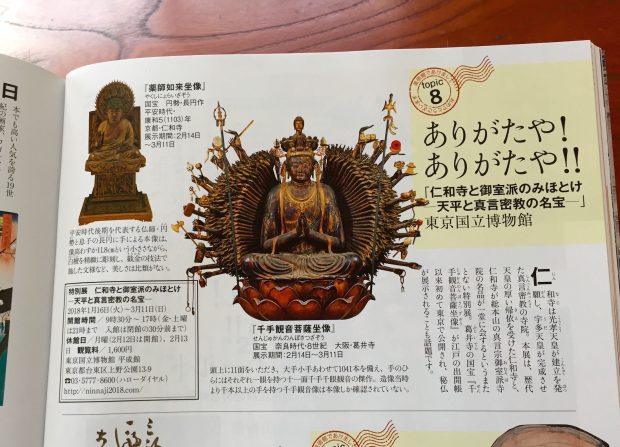 Rather than assuming the image of a violent and powerful deity, this Thousand-armed Kannon exudes an air of delicate refinement. The sculpture depicts the celestial being sitting cross-legged with palms pressed together in prayer atop a lotus blossom featuring a calm yet dedicated expression. Its seemingly endless arms aimed to help stop suffering stretch out from around the deity to form a beautiful halo. The plump lips and graceful hands are said to be characteristics of Tenpyo period (729-749) Buddhist sculpture, and they too imbue the god with a softness ideal for a god of compassion.

The Thousand-armed Kannon it would seem, with its arms poised for the ready with magical tools in hand, captures the idea of a divinity ready to swoop down from the heavens to save those in helpless situations.

In the image of an all-seeing god

While the halo of arms create an impressive sight from afar, do take a closer look if possible. An inspection of the hands will reveal an eye painted in India ink on the palm of each hand. In order to lend a helping hand to those in need, the Kannon requires many pairs of eyes to spot trouble and brings new meaning to the concept of omnipresence. 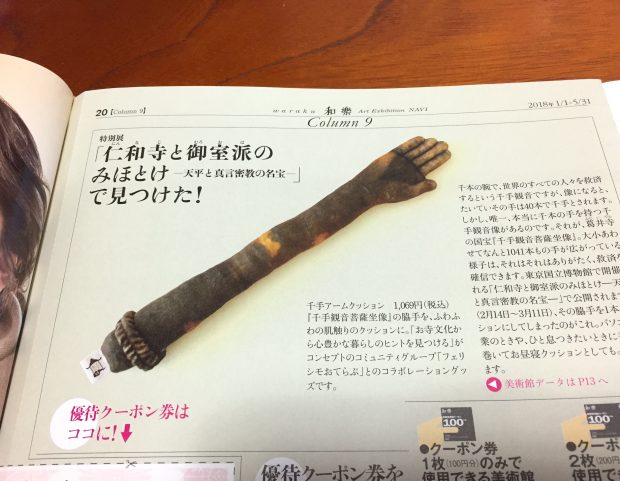 An image of the arm cushion souvenir at the Tokyo National Museum designed after Fujii-dera Temple’s Thousand-armed Kannon.

Speaking of helping hands, the Tokyo National Museum gift shop is offering arm cushion designed in the image of the Thousand-armed Kannon’s arms as fun souvenirs!

Those attending the Tokyo National Museum exhibit will also have the chance to enjoy a 360-degree view of the statue. This affords a look behind the seated bodhisattva to reveal the secret behind the sculpture’s construction; aside from its 2 main arms in front, none of the deity’s other 1,039 arms are actually connected to its main body!

However, those who cannot make the “Treasures from Ninnaji Temple and Omuro” exhibit, still have the opportunity to view “Seated Thousand-armed Kannon Bosatsu” at its home in Fujii-dera Temple on the 18th day of each month and every August 9th.