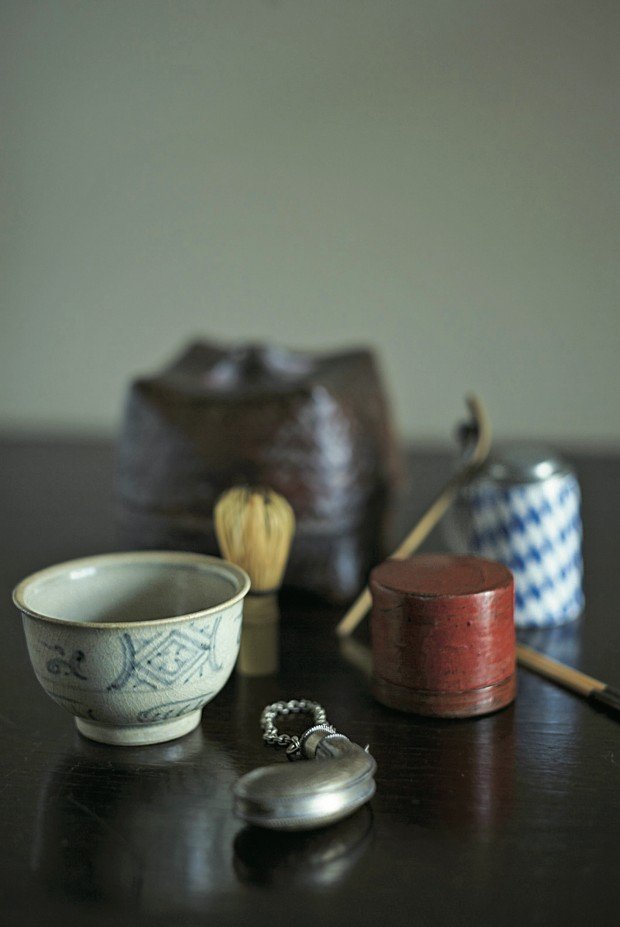 Some traditional tea utensils such as a tea bowl, a container to hold powdered matcha, a tea scoop, and basket to hold these items.

We interviewed Kazumi Aso, Osamu Saruyama and Aya Eto who incorporate Chanoyu, or the practice of Japanese tea, into their everyday enjoinment. Each one has developed their own style and way of enjoying tea, from their approach to the activity itself to their unique and even bizarre choices of equipment. Here, we will introduce each of their “three treasures” that sets the tone and theme of their tea ceremony. 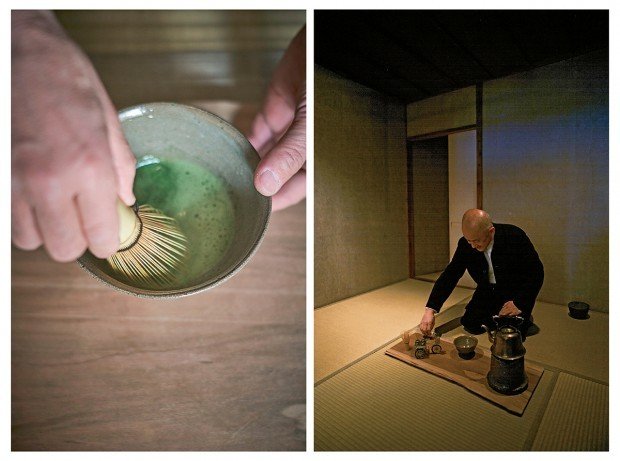 Kazumi Aso / Proprietor of the Aso Bijutsu Gallery, specializing in ancient and modern art and antiques. The gallery also houses a tea room that Aso built himself, where he conducts tea ceremonies and tea lessons.

1. A setting designed to put the heart at rest

On entry, what catches the guest’s eye first is the tokonoma alcove with its calligraphy by Muneyoshi Yanagi, who likely did the quietly tasteful scroll mounting as well. “Forget the tea …” It starts to make sense: If you forget about the formalities of the tea ceremony, your spirit relaxes and you can enjoy yourself. In Aso’s approach, the tea ceremony becomes elegance balanced with humor and whimsy. 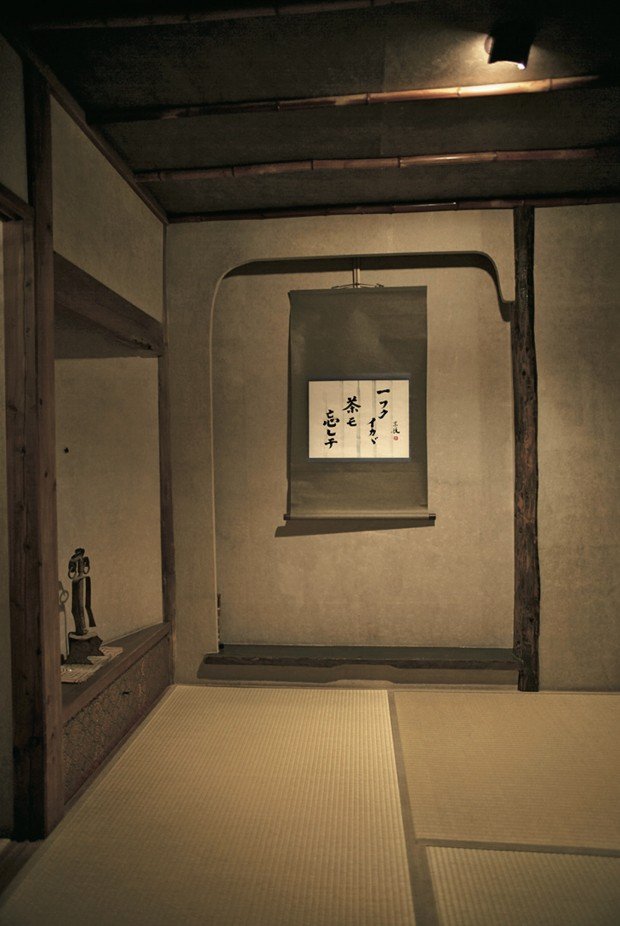 Tokonoma alcove with its calligraphy by Muneyoshi Yanagi.

Your eye can’t help being drawn to the lovely blue-green of this bronze bowl. This bowl, a product of the Khmer era around the 17th century on the Indochina peninsula, is used for collecting the water used to rinse the tea bowls. In addition, Aso also uses a medicine bottle he found in a Shanghai curio shop and other old items to impressively set the stage. 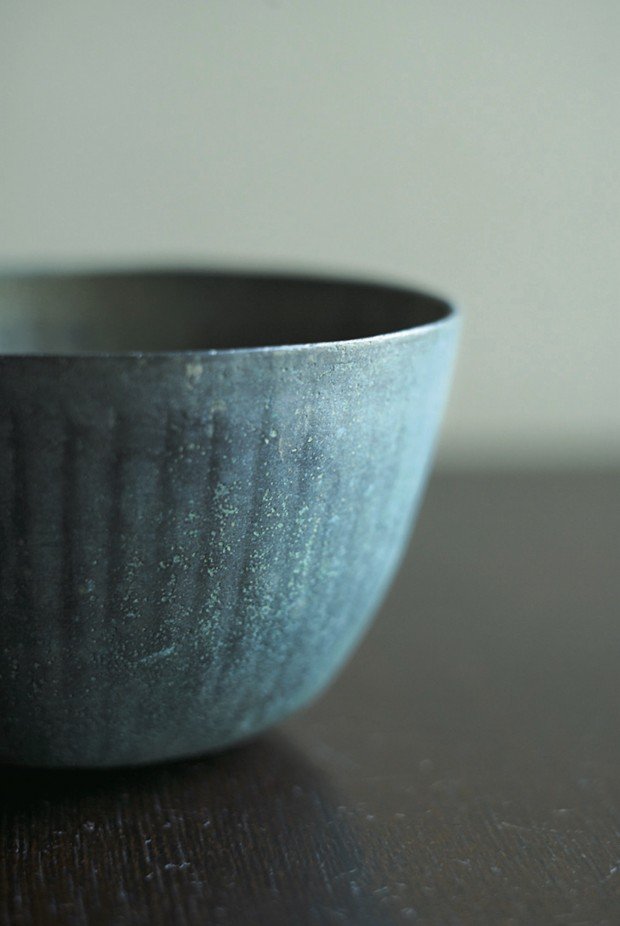 A Khmer-era bronze used for collecting the water used to rinse the tea bowls.

3. A beautiful, sturdy board serves as the stage

Aso himself sought out this solid wooden board with its beautiful wood grain pattern and cut it to serve as the stage for his tea ceremonies. “This is how I greet my guests. When all the utensils are set out most conveniently, it’s simply fresh and beautiful. I think it’s just right.” 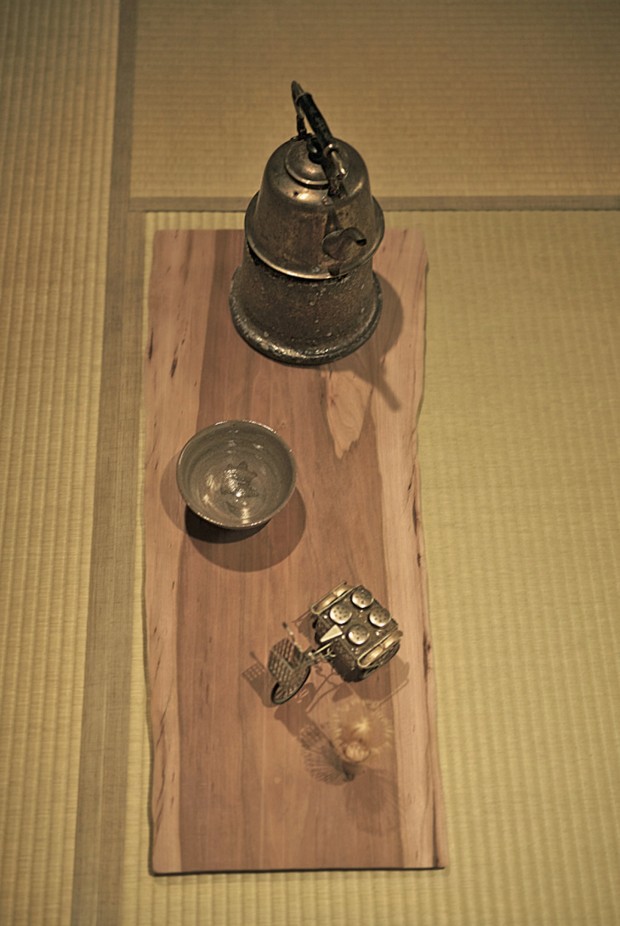 A beautiful wood grain patterned wooden board to serve as the stage for his ceremonies. 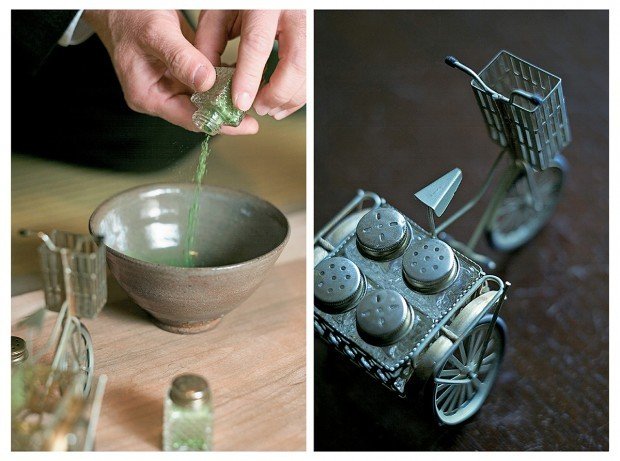 Aso uses this bicycle-shaped spice holder, which he found in an antique store on one of his trips abroad, to hold the matcha green tea powder. When he has friends over for a tea ceremony, he likes to use just one of the four containers for another dark green powder, one made from green vegetables, and he loves to see the surprise on their faces when they try it. This tea cup is Karatsu-yaki from the Ryoun Kiln run by Yoshihiro Nishioka.