Living with Nature at Fallingwater, an Architectural Feat Inspired by Ukiyo-e

While 葛飾北斎 (Katsushika Hokusai, 1760-1849) is well known for inspiring artists such as Vincent van Gogh, Paul Cézanne, and Edgar Degas, the Japanese artist’s works also influenced one of the greatest modern architects. 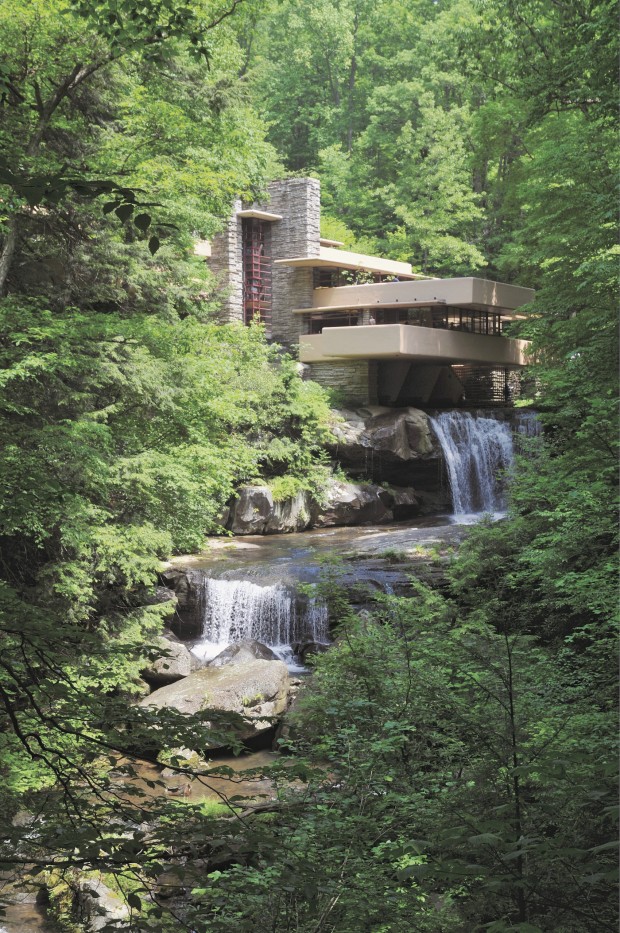 The sound of rushing water. A terraced villa of ochre and Cherokee red that harmonizes with the surrounding boulders and cascades elegantly down in layers like the many waterfalls tumbling below. A special getaway to coexist with Nature. This is Frank Lloyd Wright’s architectural masterpiece known as “Fallingwater”.

While its organic design is recognized around the world, did you know that Fallingwater is the living (and lived-in) representation of a Japanese ukiyo-e print? Let’s discover the origins behind Wright’s fantastical creation.

Frank Lloyd Wright is known best in Japan as the architect of the Imperial Hotel’s former building. While his efforts in helping to modernize Japan are well recognized, and his inspiration from Japanese architecture are well documented, there remains another, lesser known side to the world-famous architect. Did you know that Frank Lloyd Wright was also an avid collector and lover of 浮世絵 (ukiyo-e, “pictures of the floating world”), a genre of art depicting everyday life in the seventeenth through nineteenth century-Edo?

The story behind the design and construction of Wright’s masterpiece “Fallingwater” tells the tale of his passion for ukiyo-e.

Living with Nature, not just among it

Located in Pittsburgh, Fallingwater is the alias for the Kaufmann’s Residence, which was created for the owners of the successful Kaufmann’s department store. The weekend home derives its second name from the streaming waterfalls that cascade down throughout the premises.

The Kaufmanns requested a villa befitting of the suburbs but surrounded by nature, and Wright responded with a surprising design for the vacation house to rise above the falls. With Wright’s unique design, the house would meld with its natural surroundings and also allow it to be filled with a soft and calming sound of flowing water. Upon seeing these drawings though, Kaufmann demanded that the layout be changed; he and his family wanted to enjoy viewing the waterfalls from their home, not sit atop of them. 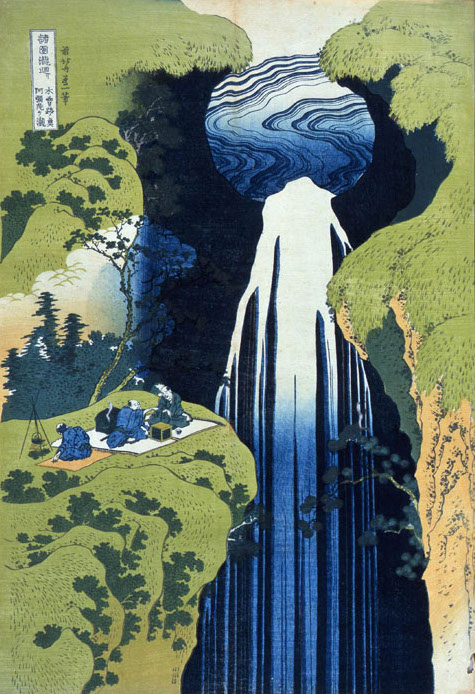 However, Wright replied with, “I designed this house because I want you to live with the waterfalls and Nature.” The architect then took out a single sheet of paper featuring an ukiyo-e print. It was a print from Hokusai’s “Tour of Waterfalls from Various Provinces” series. After viewing this uniquely-drawn ukiyo-e of water streaming down a fall, Kaufmann was told by Wright that Japanese people lived in harmony with Nature. It is said that through this act, Wright received not only Kaufmann’s understanding, but his satisfaction for the planning to move forward as well.

This print served as the model for garden designs by a world-famous architect!

The way in which the flowing water is depicted in the above woodblock print belies the handiwork of Hokusai, a well-known fanatic about drawing moving water.

Frank Lloyd Wright left behind great achievements in the history of modern architecture, including the National Historic Landmark, Fallingwater. So what does it mean that this great architect drafted a famous work inspired by Hokusai’s “A Tour of Waterfalls in Various Provinces”?

Hokusai didn’t have the chance to know how his work would generate such influence—especially on a vacation house abroad by such a historically-famed architect—but this example stands as testament to the genius of Hokusai.