The development of mass-produced color woodblock prints in mid-18th century Japan helped fuel a demand for commoner art and created a new commercial art market. Printing of woodblock prints was highly competitive with publishers wanting to sell as many as possible. How does one stay ahead of the game?

As the commercially successful designer of prints, Kitagawa Utamaro (1753-1806), proved, innovative techniques and new designs could throw an artist into stardom almost overnight. A look into his highly popular bust portraits not only reveals Utamaro’s technical genius, but also a lot about the popular culture of townspeople of the day.

Dominating a generation with portrait prints

Within the genre of 浮世絵 (ukiyo-e, literally pictures of the floating world), which developed from the 17th century through to the 19th centuries and depicted contemporary life, several subject matters gained popularity. One of the early themes from the beginnings of ukiyo-e was that of 美人画 (bijin-ga, pictures of beauties). “Beauty Looking Back” by Hishikawa Masanori who popularized ukiyo-e, is considered a masterpiece.

Early bijin-ga subjects, like the woman in “Beauty Looking Back”, were often painted in their entirety, and it was Kitagawa Utamaro who adopted and became known for the method of bust portraits called 大首絵 (okubi-e, literally large-headed pictures), which featured the head and sometimes the upper torso of a subject. Though this treatment of subjects had been used in actor prints, Utamaro applied it to images of beautiful women. The citizens of Edo (modern Tokyo) loved these new designs and with that, Utamaro joined the ranks of the top ukiyo-e artists of the day.

Kitagawa Utamaro apprenticed under the town painter, who had learned from others in haikai poetry and Kano-style painting schools. Utamaro first debuted into the world of ukiyo-e as a designer for pictures in comical kyoka poetry books before working with the prominent publisher, Tsutaya Juzaburo, on bust portraits of beautiful women known as 美人大首絵 (bijin okubi-e). Though we have featured Utamaro’s works before here at INTOJAPAN, there are still many more secrets to discover. This time we dissect his bust-style portraits in detail.

Aside from just changing the composition, Utamaro capitalized on the up-close format to carefully draw each strand of hair. The artist also utilized various technical skills in pursuit of making each print an exquisite work of art, including shimmery ground-mica backgrounds, embossing, and plain backgrounds to enhance his subjects. Through his mastery of design, Utamaro achieved a popularity that nearly dominated his generation of ukiyo-e artists. 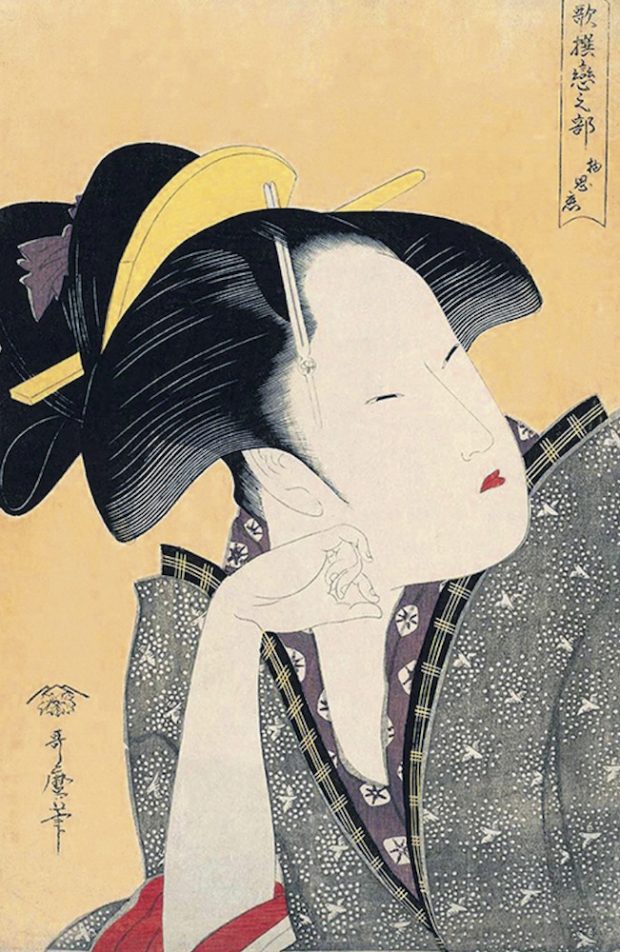 Utamaro’s okubi-e composition prints, such as “Reflective Love” pictured above, reveal a plethora of his well-thought out techniques. In addition to the delicately drawn flow of hair and the details of the subject’s kimono, it is also interesting how the imbalanced size ratio between the figure’s head and hand expresses her melancholy state.

These prints functioned as publicity portraits!

One reason for ukiyo-e’s great popularity in the Edo period (1603-1868) lies in the fact that this genre of art mainly featured places of ill repute, such as the red light districts and theatres. Commoners could not easily enter these places, and so images of courtesans and kabuki actors who belonged to those fantasized entertainment industries became something akin to objects of adoration for regular townspeople. In other words, prints of high-ranking Edo pleasure women and actors elicited the same feelings and responses as idol and celebrity publicity photographs and posters do today. 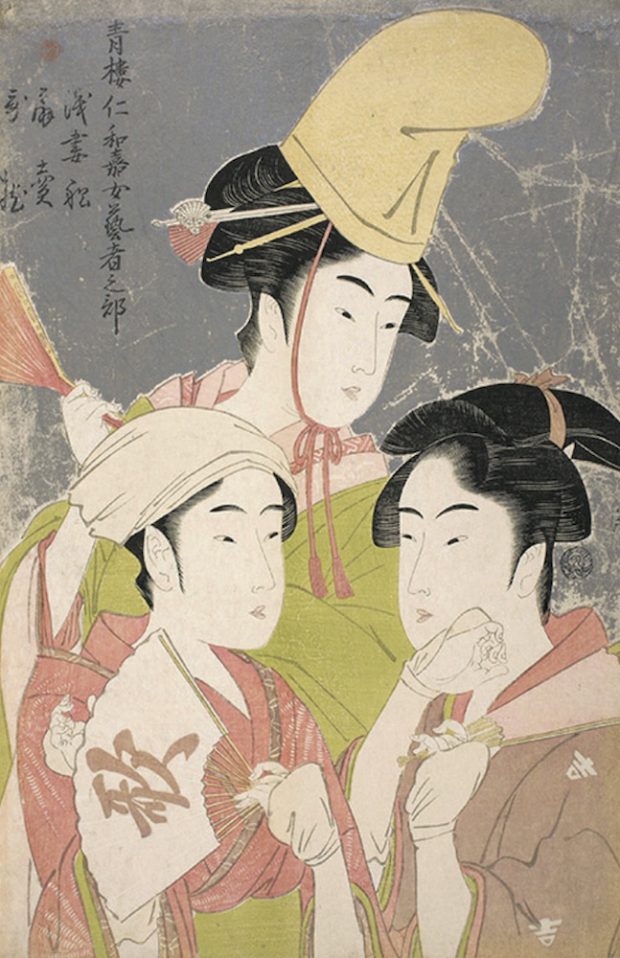 Edo-period brothels known as seiro were located in the pleasure quarters of Yoshiwara. Here, during a variety of events, the geisha singers and dancers would dress up in their favorite get-ups and parade through the red-light district. In the above image, three popular geisha at the time are drawn in their costumes for the Yoshiwara Niwaka Festival. In an interesting twist, the three ladies wear the attire of young men.

Not only courtesans and other women of the pleasure quarters served as models for bijin-ga. Prints furthered their promotional value when they also began featuring 看板娘 (kanbanmusume, “poster girls” or pretty young maidens used to attract customers) at tea houses along the roadsides and within temple and shrine grounds.

Commoners could not always easily see these reputed beauties in person, but then entered Utamaro’s close-up portraits in the okubi-e style of composition. Utamaro’s coquettish depiction of the popular girls of the day found an enthusiastic audience among men, and it is said that the popularity of models in Utamaro’s works also increased thanks to the publicity. 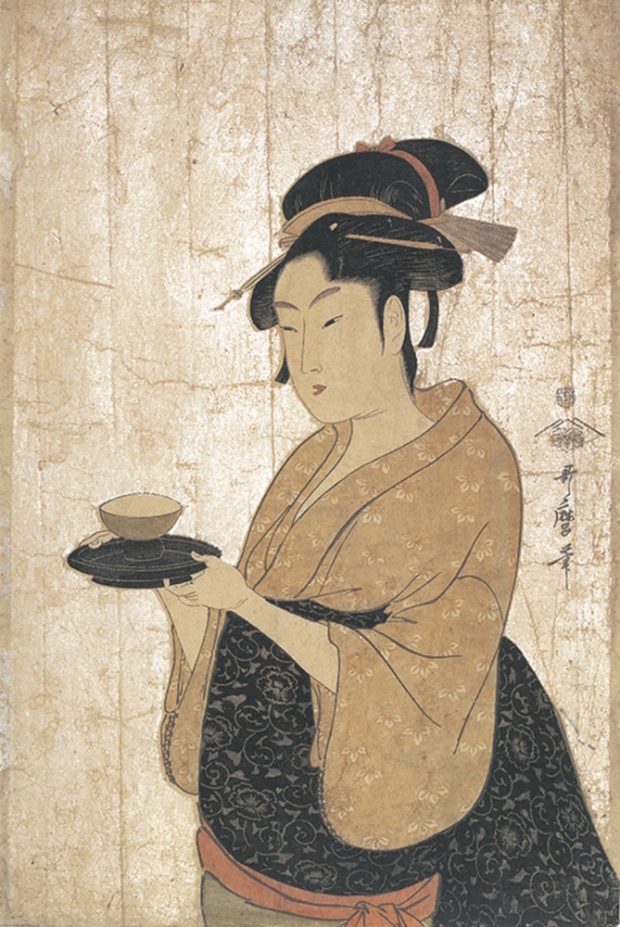 A poster girl named Okita working at the tea house “Naniwaya” located in the grounds of Asakusa’s Senso-ji Temple was the model most frequently depicted in Utamaro’s bijin-ga. Pictured above is one such example from the artist’s prime days. Utamaro’s depiction of the tea girl, from her expression to her gestures and kimono patterns, is truly exquisite.

Ukiyo-e relayed the trends of the day

For those involved in ukiyo-e production – the designers, carvers, printers, publishers, and so on – the number of sales was a pressing issue. Printmakers constantly pursued new ideas and ways to sell as many prints as possible. Thanks to this competition, technical achievements in ukiyo-e made great strides relatively quickly. 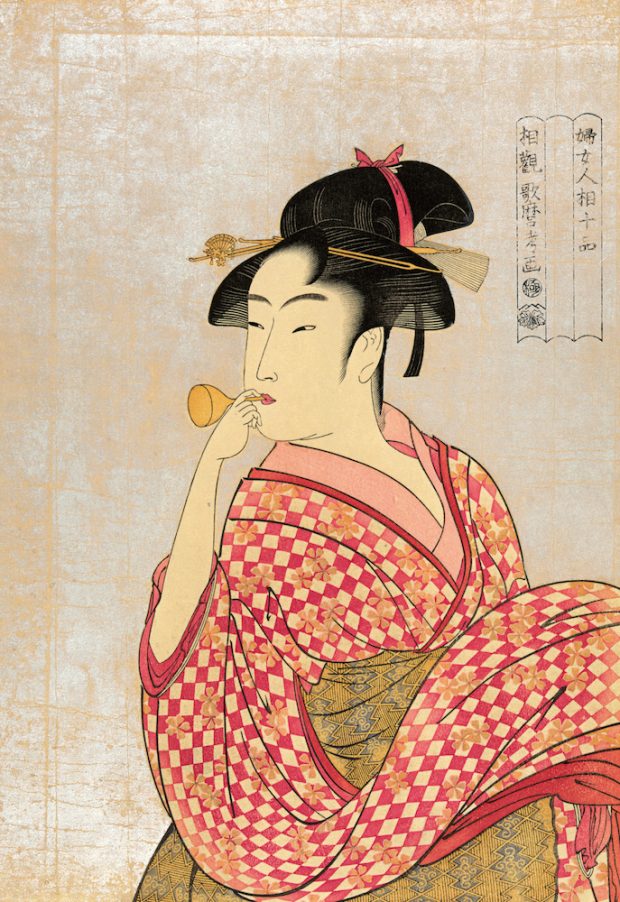 Utamaro alone mastered many techniques; with examples such as kewari (delicate lines to convey the form and flow of hair) and kirazuri (application of iridescent mica powder), he sought his own expression of beauty. The artist did not merely stop at technical innovations though. In the past, just like nowadays, women were interested in what was in vogue. To appeal to their interests, Utamaro studied the fashions and trends of the day, including popular hairstyles, kimono patterns, and color combinations. He even introduced the latest popular import good of the day, a toy glass pipe called a poppin, without delay in his print as seen above in “Young Woman Blowing a Poppin”. 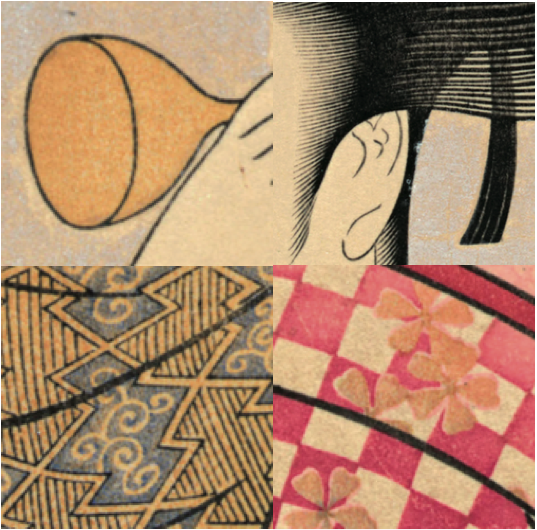 Four fashion points feautred in Utamaro’s “Young Woman Blowing a Poppin”. The beauty of this colored print further supports Utamaro’s popularity. The top right portion takes a close look at his portrayal of women’s hair, while the top left is of the poppin. The bottom images zoom in on the kimono and obi (kimono sash) patterns.

In this way, woodblock prints also served as a form of fashion media aimed at women. With this understanding, ukiyo-e feels more familiar, doesn’t it?