Japanese green tea is highly regarded around the world, but let’s take a moment to see what exactly it is we’re drinking in our tea cups

Native to East Asia, tea plants (Camellia sinensis) have been cultivated and their leaves cured to produce a drink consumed in many cultures around the world: tea. There are many varieties of tea leaves, each with their own unique traits and flavors, but today we would like to take a look at some of the tea grown throughout Japan, in addition to some famous types of Japanese green tea.

The 3 main groups of tea

The various teas drunk around the world, excluding herbal teas that do not use tea leaves, can be categorized into 3 main groups based on their degree of oxidation and fermentation. If tea leaves are left as they are after being plucked, the enzyme oxidase in the tea leaves begins oxidizing and simultaneously starts the process of fermentation. Oxidation turns the leaves a brown color. However, as you can see, a lot of Japanese tea is green. The color of 緑茶 (rokucha, Japanese green tea) is achieved because the leaves used, are not allowed to ferment.

As soon as tea leaves grown for green tea are plucked, they are heated to halt oxidation and fermentation, which preserves both the leaves’ green color and fragrance. In comparison for example, oolong tea is allowed to partially oxidize before being processed, while black tea is fully oxidized and fermented. Some teas like puerh even go through a second fermentation process and form a different fourth group of tea. 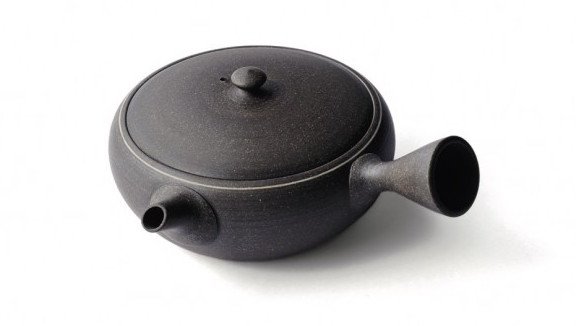 The simple shape of this pot and its height of 3.5 cm, helps draw out the flavor of green tea. Made by Hiroshi Mizuno, this small rounded tea pot measuring 9 cm in diameter is available at Icho in Denenchofu for 8,400 yen.

The heating process to deactivate oxidase in Japanese green tea involves either steaming or roasting the tea leaves. A majority is steamed, but from there, various other factors such as the way in which tea leaves were cultivated and which parts of the leaves are used, determine further categorization. Some examples of Japanese green tea include the most basic 煎茶 (sencha, a type of ryokucha), a high-quality green tea called 玉露 (gyokuro), 茎茶 (kukicha) made from the stems and stalks of tea plants, coarse 番茶 (bancha), roasted ほうじ茶 (hojicha), and many more. From now, we will focus on 3 varieties of green tea: the most typical type, sencha, the finest quality known as gyokuro, and the highly popular kukicha. 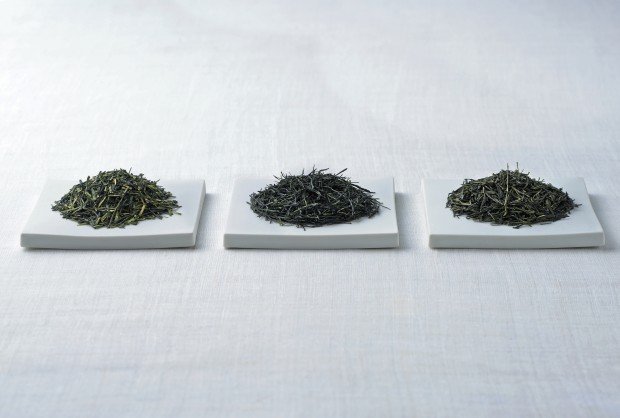 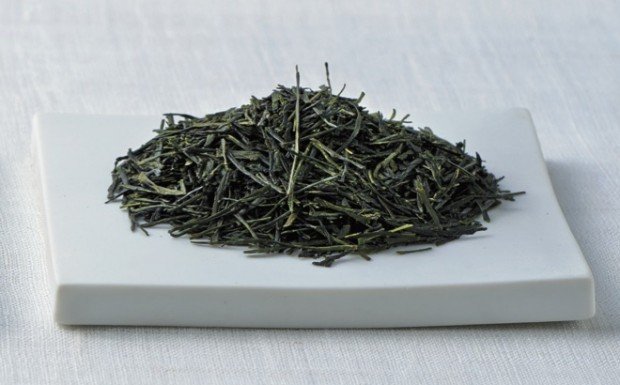 About 80% of Japanese tea production goes towards making the most widely drunk type of green tea, sencha. Sencha comes from high quality tea leaves which are strongly twisted and feature a lustrous dark green color. A unique characteristic of sencha is its nice balance of savory umami flavors and astringency. Sencha leaves grow under the sun in the open air to harmonize the three amino acids that contribute to sencha’s flavor: astringency from catechin, bitterness from caffeine, and theanine for savoriness. The result is a very fresh and vegetal taste. 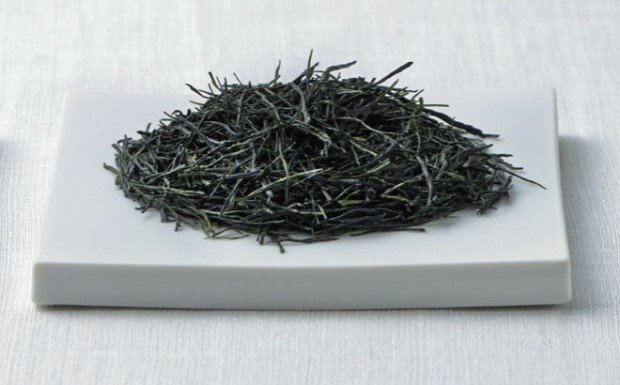 Tea leaves cultivated for gyokuro tea are shielded from the sun for about 3 weeks prior to being harvested. The shading allows for more of the savory amino acid theanine to be preserved and reduces the production of catechin in the leaves. As a result, gyokuro features a depth and richness not found in sencha. A mouthful of gyokuro tea also releases a mild sweetness. The high quality tea’s name translates to mean 玉露 (“jewel dew” or “jade dew”) and refers to gyokuro’s pale green color.

Gyokuro tea not only calls for different cultivation methods, but different preparation, too. In order to bring out the full-bodied flavor and soft sweetness, gyokuro leaves should be steeped longer and in lower temperature water than sencha. Each deeply green-colored leaf is carefully and tightly twisted by hand to maximize flavor. Another of gyokuro’s charms lies in its rich aroma achieved from the shading process.

The unique and refreshing scent of kukicha 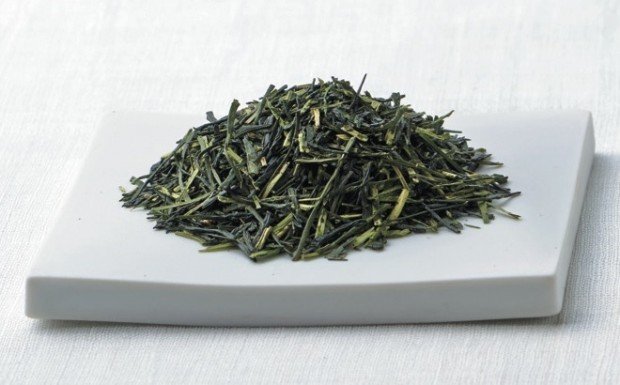 Once tea leaves for sencha are plucked, the leftover stalks of tea plants are collected. In short, kukicha tea comprises of parts usually excluded in other green teas, and as a result showcases a light and refreshing taste along with a fresh fragrance that many find preferable. It also naturally contains low amounts of caffeine.

A type called 雁が音 (karigane, cry of wild geese) created from the stems of plants used for high-quality sencha and gyokuro in particular wonderfully combines savory notes with a sharp clean finish. Kukicha should not be steeped too long or else it will turn bitter.

Where is tea produced in Japan?

Though many areas throughout Japan produce tea, several locations have made a name for themselves in the tea growing business. Shizuoka prefecture contributes the greatest amount of Japan’s tea, and among their products, Kawane-cha the “Darjeeling of Japan,” Makinohara-cha, and Honyama-cha are famous for their aroma. Meanwhile, Kagoshima prefecture in Kyushu claims Japan’s second largest output of tea, and are well known for a variety of brands such as Chiran-cha. Coming in third is Mie prefecture with their highly-regarded Ise-cha. 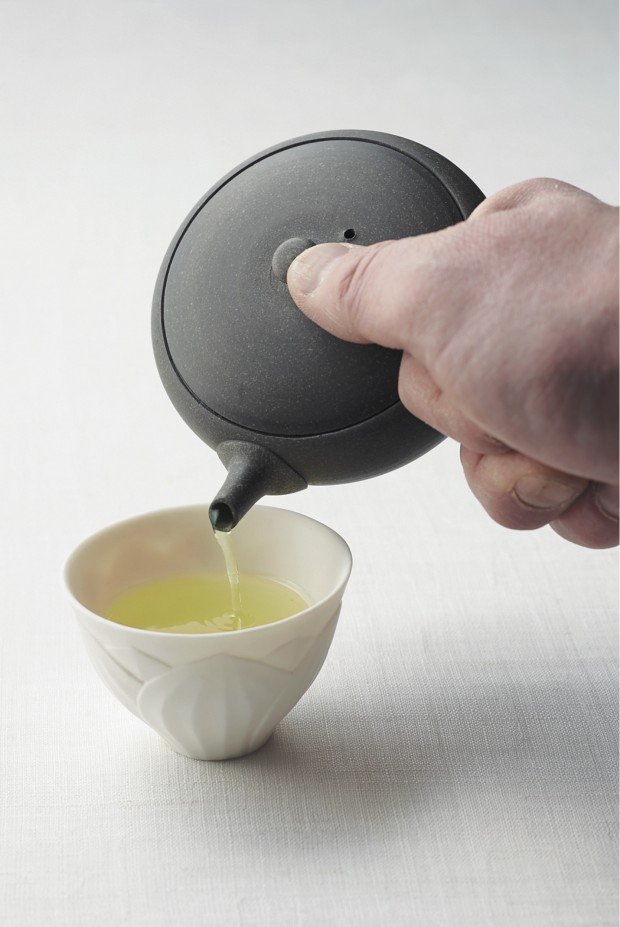 The best gyokuro hails from the tea capital Kyoto’s Uji area, the Okabe area in Shizuoka, and Yame in Fukuoka prefecture. The latter Yame is also popular for their steamed sencha. Try a variety of teas and enjoy their differences as you discover which ones best suit your tastes.

This advice comes from…

The Japanese tea sommelier, Takuro Oyama, of Shimokita Cha-en ascertains the various personalities of tea leaves and blends them to bring out the best qualities. Oyama is one of 9 certified tea sommeliers in Japan who have achieved the prestigious tenth rank. His older brother Yasunari is another one of those 9 tea masters and together, the two siblings run their tea shop Shimokita Cha-en in Tokyo as well as host events to spread the appeal of Japanese tea.