During the Edo period (1603-1868), an exciting and chic urban culture blossomed in Japan’s new capital, the city of 江戸 (Edo, present day Tokyo). Capturing the vibrant city life was a genre of art called 浮世絵 (ukiyo-e, “pictures of the floating world”), which included woodblock prints of stunning landscapes, popular kabuki theatre actors, and elegant courtesans. Among the ukiyo-e depicting beautiful women rose a star artist known as 喜多川歌麿 (Kitagawa Utamaro, 1753-1806). People then and now have been enchanted by his drawings, and while Utamaro made his legacy with images of beauties, his artwork originally focused on rather different themes.

Utamaro’s Transition Across the Decades

Let’s take a look at the evolution of the artist Kitagawa Utamaro and see how he came to be known as the master painter of Japanese women.

Around age twenty-three, he began his career as an ukiyo-e artist under the name of 北川豊章 (Kitagawa Toyoaki). Initially he was assigned work such as covers of collections of 人形浄瑠璃 (ningyo joruri, puppet plays also known as bunraku), 細判 (hosoban, narrow format) 錦絵 (nishiki-e, polychrome woodblock prints) of actors, or illustrations for the 黄表紙 (kibyoshi, yellow-backed picture book) collections of popular tales, all far out of line with his later artistic endeavors. During this period as a largely unknown young artist, Utamaro very likely spend much time and energy on trying to identify his artistic strengths and polishing up his drawing skills. 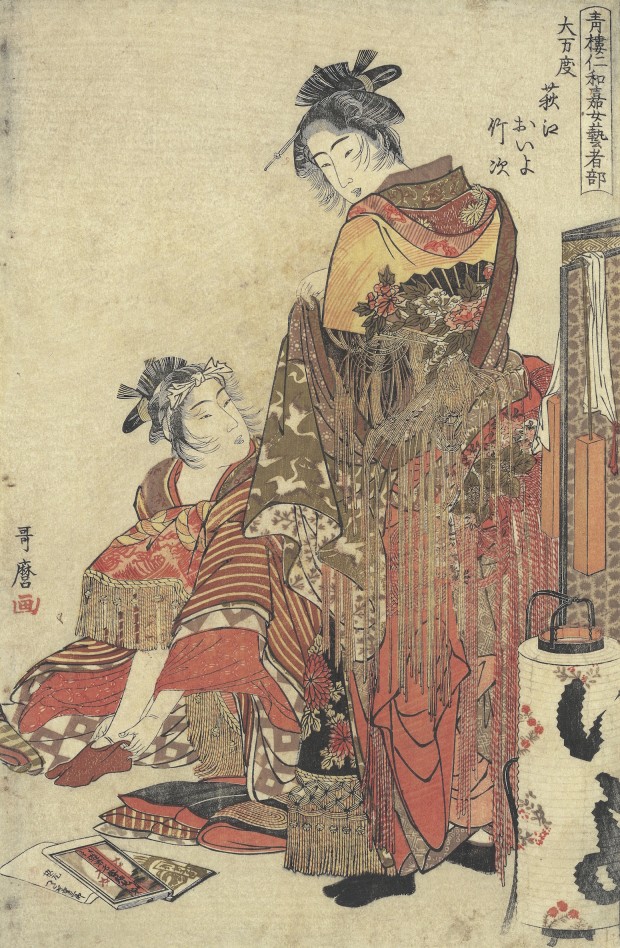 During this period of relative obscurity, Utamaro’s drawing skills impressed the prominent publisher 蔦屋重三郎 (Tsutaya Juzaburo, 1750-1797), whose influence brought Utamaro a turn for the better. He also took advantage of the growing popularity of 狂歌 (kyoka, “wild” or “mad” comic poems in the traditional tanka style with a metre of 5-7-5-7-7), to produce a series of illustrated kyoka books as well as volumes such as his “Picture Book of Selected Insects.” These included depictions of everyday life and customs incorporating kyoka. He brought out “pillow books” (erotica) as well. As he suddenly began to apply all the talents and techniques he had quietly built up over the years, Utamaro at long last was on the road to success. 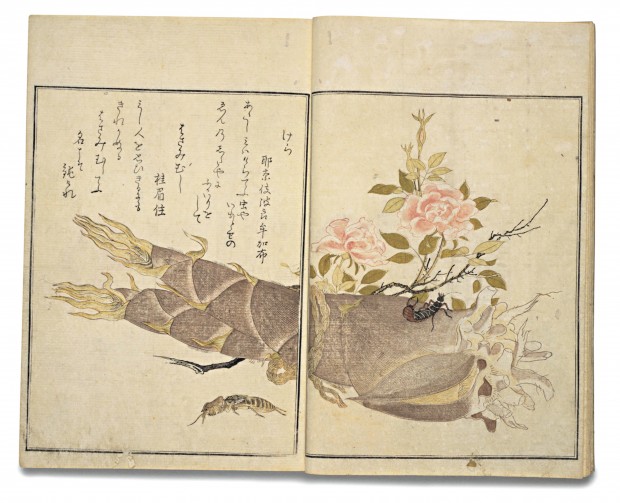 In Utamaro’s kyoka picture book, he provides illustrations for thirty poems on the subject of “the heart in love” with references to insects. The kyoka were collected from the public for a poetry session by the Sumida River in Edo. This work allowed Utamaro to display the full range of his illustrative and compositional techniques.

For four years from age forty, Utamaro built on his experiences as an ukiyo-e artist during his thirties to produce a series of works on beautiful women, including the portraits of beauties characteristic of his style and using colorful brocade prints and brush painting rather than traditional woodblock. During these four short years, his works had a huge impact, instantly raising him to the level of a star among ukiyo-e artists. 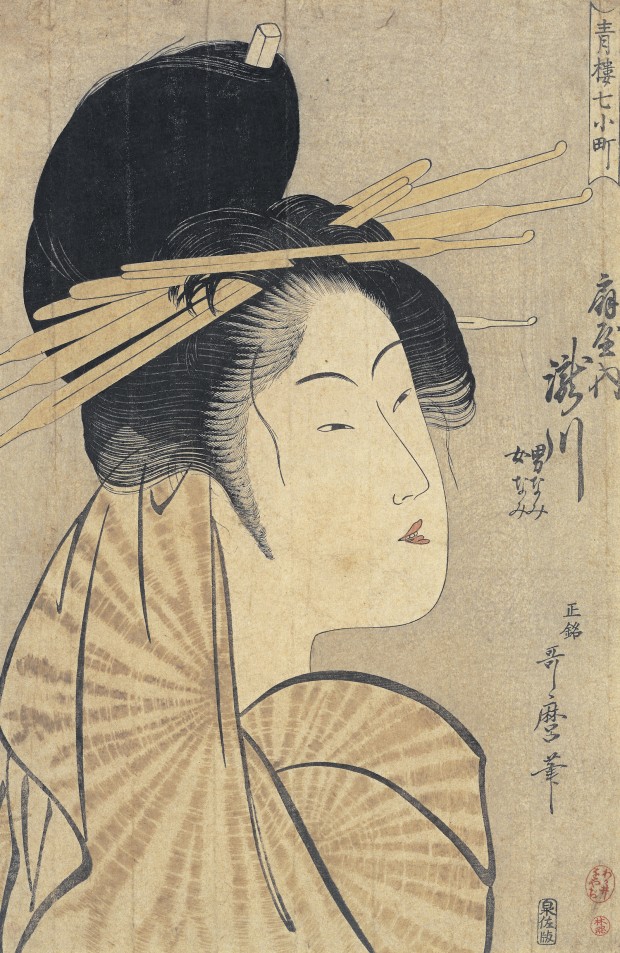 Kitagawa Utamaro produced seven illustrations dealing with prostitutes emblematic of the Yoshiwara red-light district in Edo. In the above print, the woman, apparently just coming out of a hot bath, has slightly disheveled hair and a beautiful hairline which, in combination with her delicately suggestive expression of eyes and mouth, emphasize the woman’s physical charms.

Despite the string of prohibitions decreed by the shogunate, Utamaro’s strong spirit as an ukiyo-e artist and his natural spirit of defiance prevented him from giving up on producing pictures of lovelies and brought him to seeking loopholes in the prohibitions. A number of prints depicting the 16th-century samurai 豊臣秀吉 (Toyotomi Hideyoshi, 1537-1598), however, violated the restriction on drawing actual historical figures and brought imprisonment. The punishment seems to have robbed Utamaro of his spirit during his waning years. 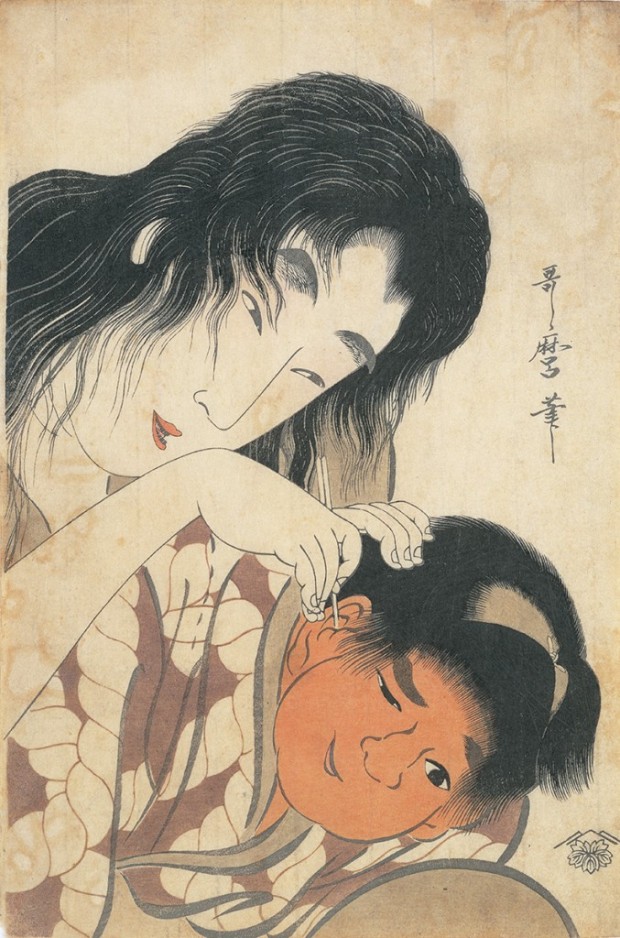 After restrictions were put on portraits of lovely women, Utamaro began a series on the traditional New Year’s subject 山姥 (Yamanba, a mountain witch) and 金太郎 (Kintaro, a young boy). Since Yamanba did not fall under any of the shogunate’s restrictions, Utamaro drew her younger and more sensual, defiantly showing his true calling as an artist of lovely women.