The biggest delight of a visit to Kyoto is to immerse yourself in the world of Japanese beauty by strolling around some of the city’s many renowned お寺 (otera, Buddhist temples). To give you a taste of what we’re talking about, we’ll take you to three temples where you can savor three quintessential forms of this country’s beauty—sliding door paintings, gardens, and architecture. In this article, we head to Myoshin-ji Temple.

A Zen microcosm nestled in an expansive garden 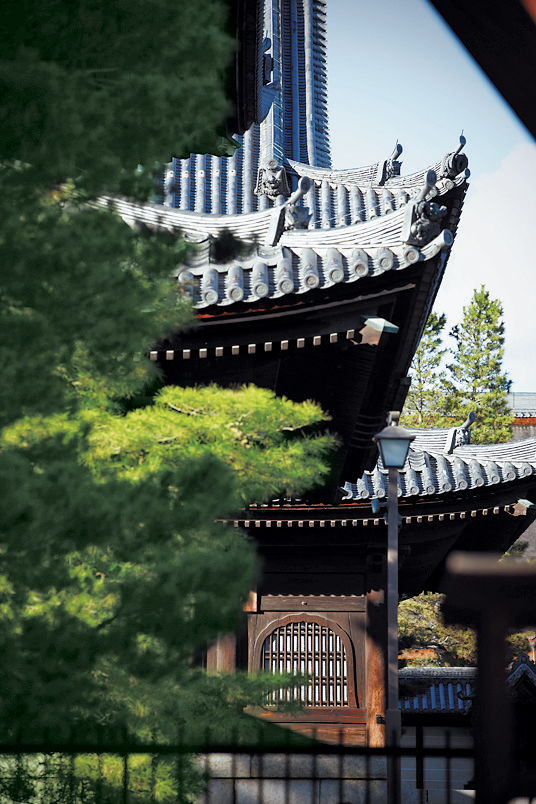 Built in 1656, Hatto Hall is an Important Cultural Property. The coffered ceiling is bedecked with Tan-yu’s “Unryu-zu” painting of dragon and clouds, which took eight years to complete.

The world’s largest Rinzai 禅 (Zen) temple, Myoshin-ji is situated on a massive estate spanning some 330,000 square meters and encompassing key buildings typical of the traditional Shichido Garan layout—such as San-mon Gate, Butsu-den Hall, and Hatto Hall—as well as 46 sub-temples. The spiritual center of more than 3,400 affiliated temples across Japan and in other parts of the world, Myoshin-ji was founded in 1337 under abbot Kanzan Egen, at an imperial villa that Emperor Hanazono converted into a temple. Unsurprising, this large complex is filled with many delightful sights, including Dai-hojo Hall (Important Cultural Property) and the temple bell, “Ojikicho” (National Treasure). 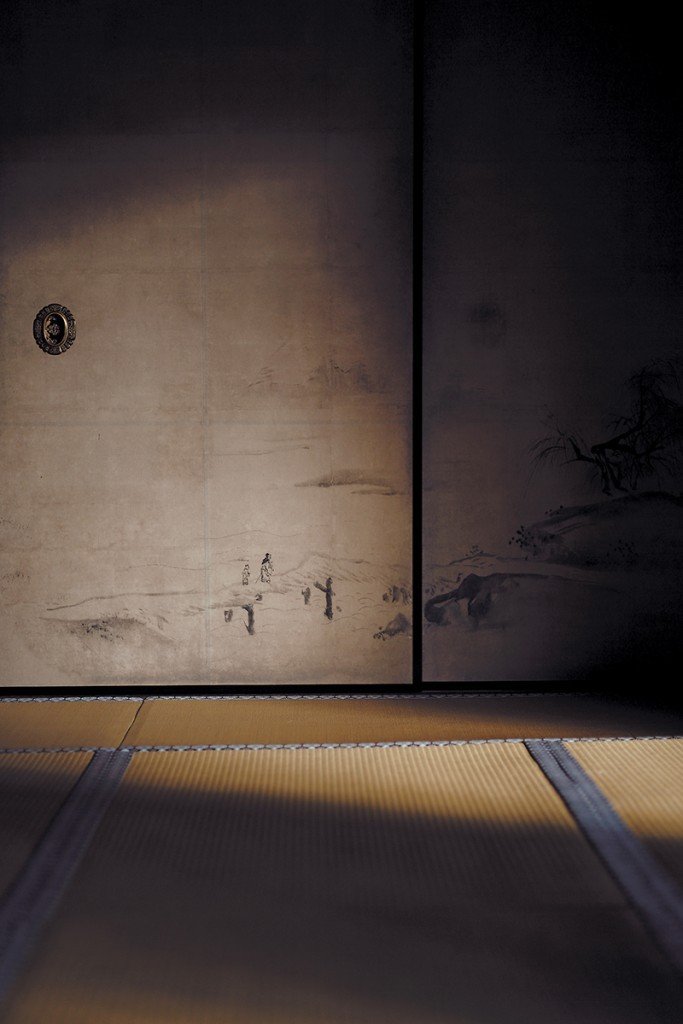 One of the first things you’ll notice when you arrive at Myoshin-ji is the contrast with the open feel of Ninna-ji, as long white walls encircle and run through the grounds, hiding from our view the various buildings nestled inside. A Zen temple that Emperor Hanazono created by converting one of his villas, Myoshin-ji exudes a Zen-like tension and the solemnity of a founding priest who eschewed splendor and superfluity to focus on training his disciples.

This temple’s biggest attraction is, hands down, the painting of a dragon that glares down from the ceiling of Hatto Hall. Laboriously crafted by 狩野探幽 (Kano Tan’yu, 16012-1674) in the mid-17th century, 「雲龍図」 (“Unryu-zu,” painting of dragon and clouds) stands out from other classical dragon paintings in many ways—the proportions of its subject, the balance with the billowing clouds, the dynamic brushstrokes, and the vibrant hues. In all, a tour de force from an artist in his fifties. 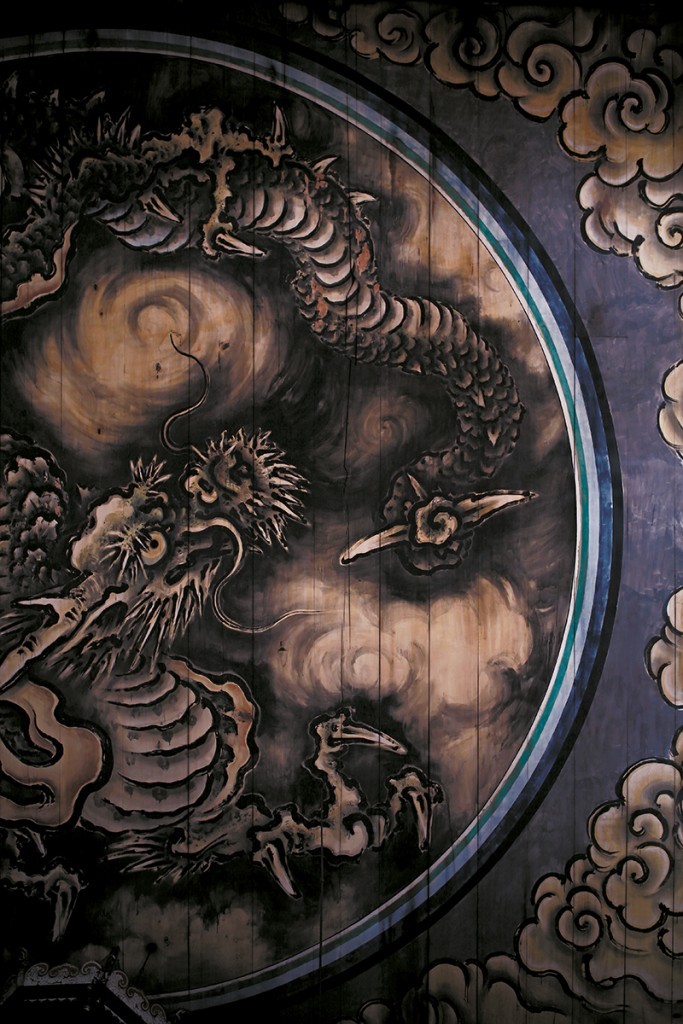 “Unryuzu” by Kano Tan’yu. Decorating the ceiling of Myoshin-ji Temple’s Hatto Hall, this image of a dragon blends elements of diverse animals—the eyes and head of an ox, a crocodile’s mouth, a serpentine body, and eagle-like talons. The beast’s fearsome countenance changes if you view it while walking in a circle below.

Now, take a stroll around the gardens of Myoshin-ji

Another must-see is the garden of Dai-hojo Hall, whose sole features are a pair of conic sand mounds and two pine trees. You’ll find yourself captivated by the lovely contrast created by this humble yet impeccably tended Zen garden and the stately 唐破風門 (karahafumon, a type of cusped gable)-style gate standing on the other side. Of course, this isn’t the only garden here; in fact, the expansive compound is one big garden where you can soothe your heart with just a stroll along the pine tree-lined stone paths. Be sure to also take in the late 16th century Sanmon Gate and other structures that radiate with the quiet beauty unique to Zen temples. 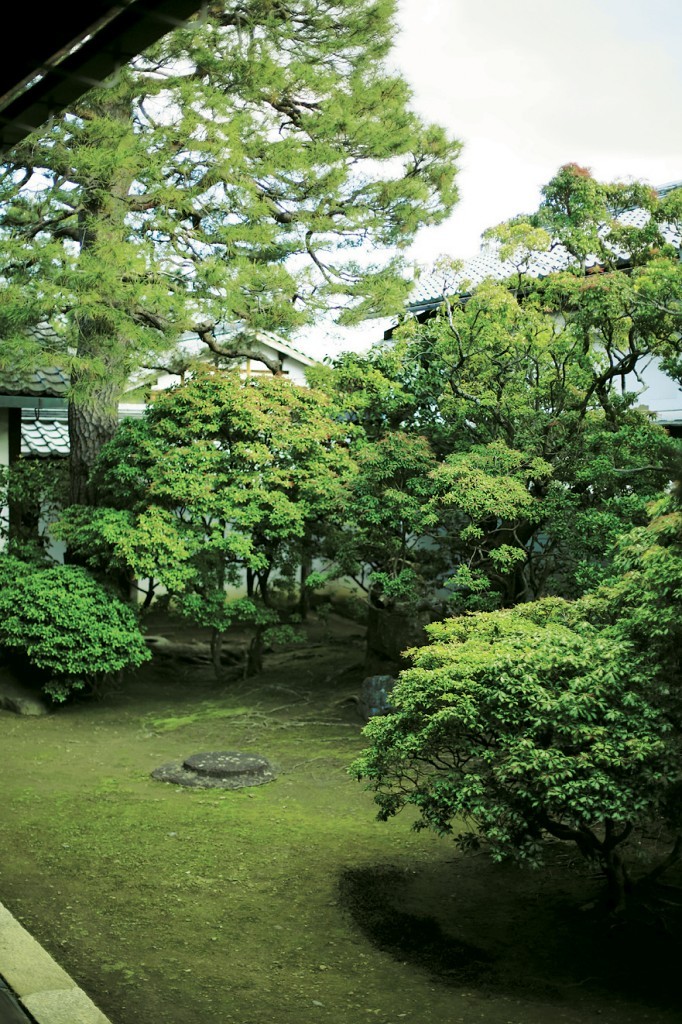 Sho-hojo Hall’s garden has been designated a National Site of Scenic Beauty (not open to the public). The diminutive but elegant space features charming elements such as a Sanzon-style rock display and a former temple cornerstone.