5 Stunning Spots to Visit within Ninna-ji Temple’s Grounds in Kyoto!

The biggest delight of a visit to Kyoto is to immerse yourself in the world of Japanese beauty by strolling around some of the city’s many renowned お寺 (otera, Buddhist temples). To give you a taste of what we’re talking about, we’ll take you to three temples where you can savor three quintessential forms of this country’s beauty—sliding door paintings, gardens, and architecture. First, we headed to Ninna-ji Temple, and now, below we introduce 5 exceptional examples of classical Japanese architecture to be enjoyed around this temple’s grounds.

Ninna-ji: A World Heritage Site populated with many beautiful structures

Love Japanese-style beauty and architecture? Don’t miss out these other fascinating buildings in Ninna-ji. 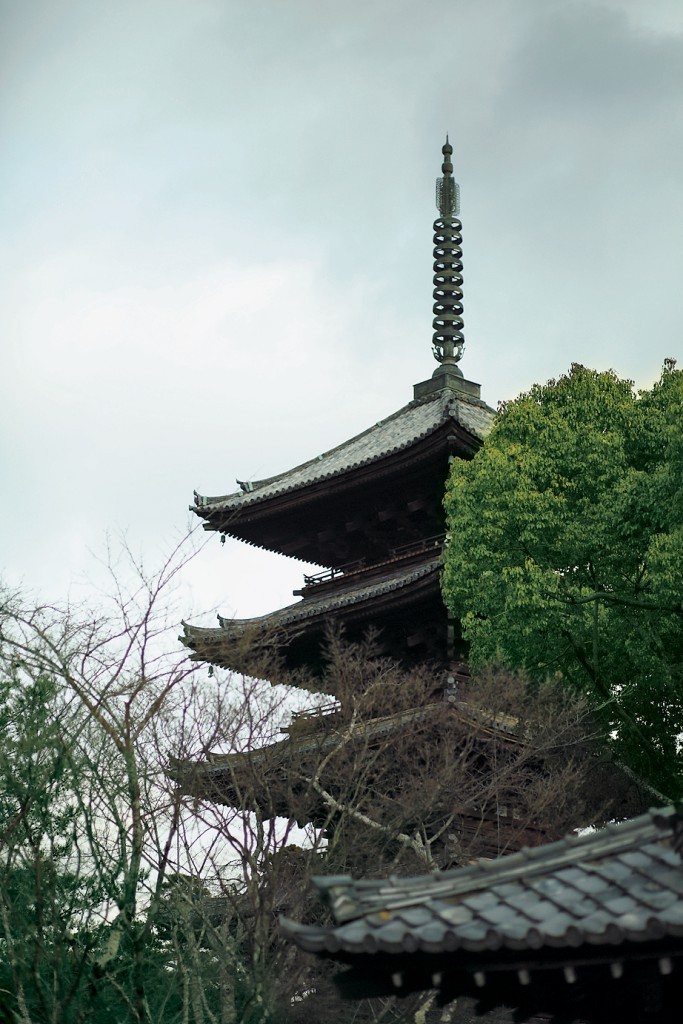 Take a look at 5 of the most beautiful Japanese structures at Ninna-ji Temple:

Regal buildings include the regally graceful Shinden, the mystical five-storied pagoda towering over the heart of the compound, and the impressive Nio-mon Gate, defended on both sides by fierce guardian statues. Although this stately temple remained under the imperial family’s patronage until the last days of the shogunate, it came to take on an open, welcoming air. Part of its attraction has been its late-blooming Omuro cherry trees. During the Edo period (1603–1868), Kyoto’s 桜 (sakura, cherry blossom) season was said to end at Ninna-ji, where commoners and nobles alike would gather to party while taking in the gorgeous floral displays. 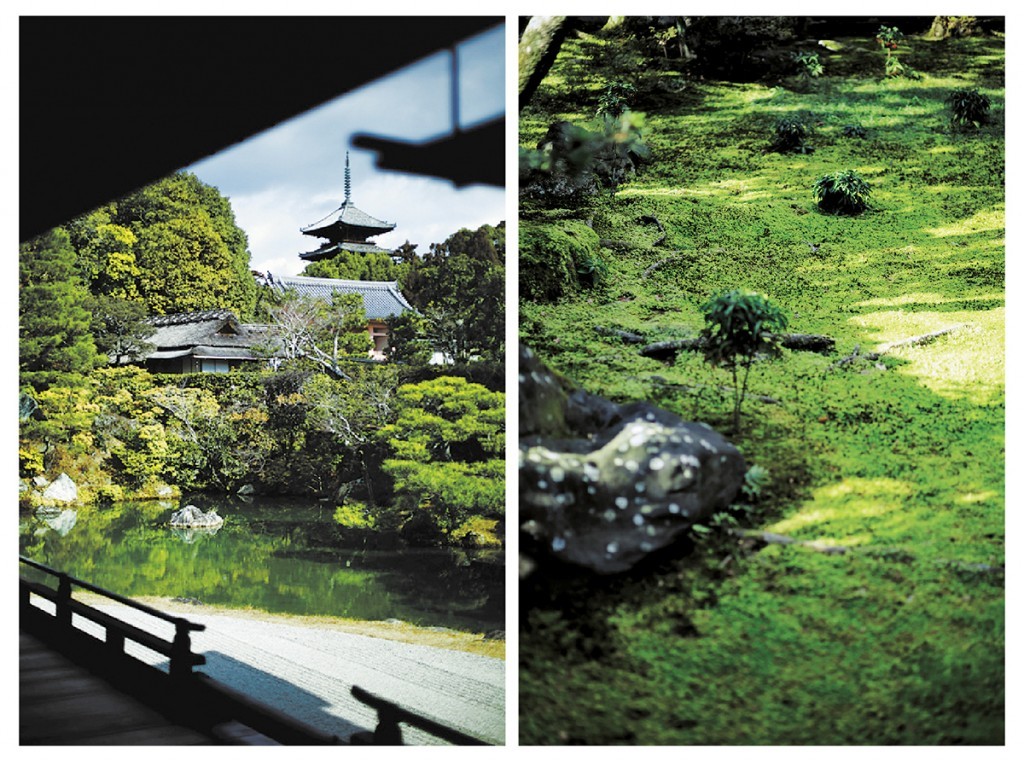 (Left) A view of the north garden from Shinden Hall. Also visible are Hito-tei teahouse and the five-storied pagoda. (Right) Traditional pond-and-stream garden outside Shinden.

Even when the cherry trees aren’t in bloom, there is much beauty to be seen at Ninna-ji, in the form of National Treasures, Important Cultural Properties, and other delightful structures and features. Anyone who loves Japanese-style beauty will especially want to check out Shinden Hall, which offers refined woodwork in its gate and transoms, white sand-covered gardens, as well as a tranquil pond with a view of the five-storied pagoda and a teahouse. There’s also Reiho-kan, a treasure hall that houses a collection of 仏教 (Buddhist) art, including a National Treasure painting of Mahamayuri. Reiho-kan is open only twice a year, in roughly two-month sessions in the spring and fall, so try to schedule your visit to coincide with either session. 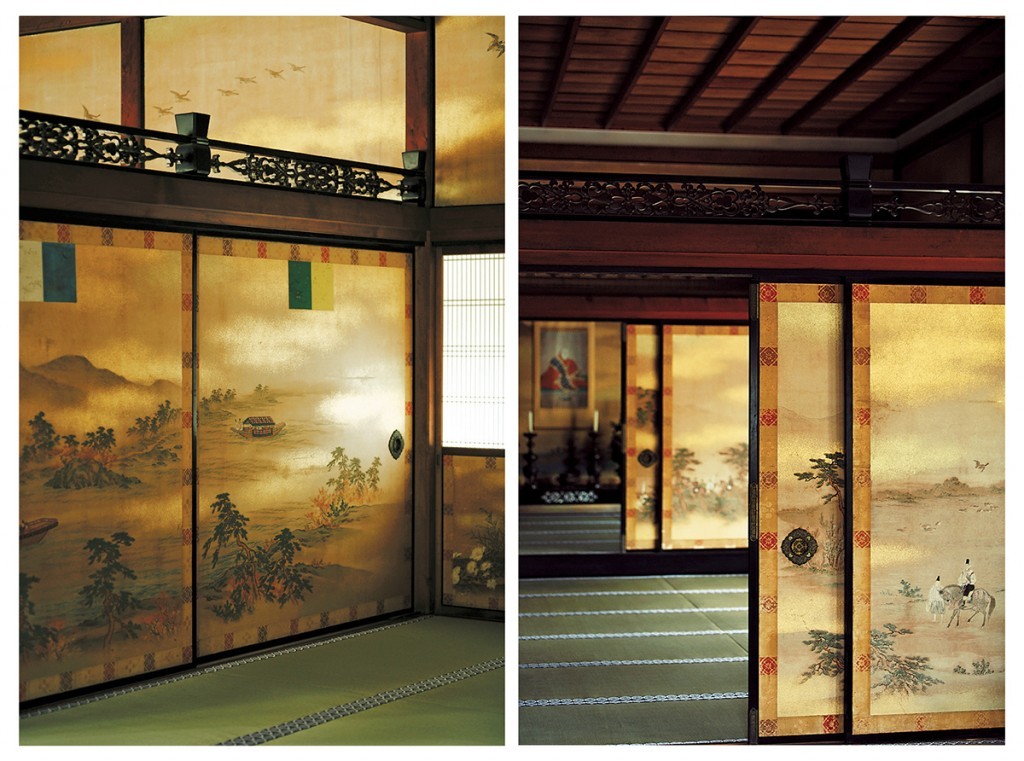 (Left) Sliding door paintings beautifully rendered by 原在泉 (Hara Zaisen, 1849-1916) are complemented by striking transom woodwork. (Right) The sliding door paintings in Ninna-ji’s Shinden were created by Hara Zaisen, a painter in the traditional Japanese style who was active in the Meiji period (1868–1912). The images include depictions of Kyoto’s Mifune boat festival.

Experience the blossoms of the more than 200 Omuro cherry trees at Ninna-ji during mid-April. You’ll find the largest cluster of them to the left after you pass through the central gate, Chu-mon. Unlike typical cherry trees, whose branches extend overhead, Omuros are short-set, so their flowers are at eye level, creating a rare, wondrous spectacle every spring.